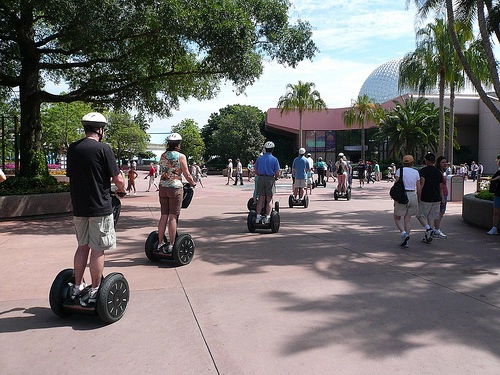 A few weeks ago, a California court told Disneyland it would need to reconsider its ban on disabled using the Segway at the resort. At the time I wondered about that 2008 settlement made in a Class Action lawsuit. As part of the agreement, Disney would provide an alternative four-wheeled standing service vehicle for those requesting a standing ECV. Turns out that settlement was appealed in 2011 by the DOJ and other parties.  Now, that settlement has now been affirmed in an August 30th decision by the United States Court of Appeals for the Eleventh Circuit.

It’s a bit confusing, but essentially Disney’s original settlement was being appealed by a new group of plaintiffs. The court rejected that appeal because it threatened the original settlement, potentially leaving the entire class (aka all disabled requiring a standing device to access the parks) with no relief at all.

During an extensive fairness hearing before the district court, Hale [Disney’s safety officer] testified regarding the safety risks posed by the operation of Segways in Disney Resorts. The very factors Hale considered before deciding that Segways are too dangerous for operation in Disney Resorts are the very factors facilities are required to consider under the new regulation.

Because of this, the court found that Disney would be likely to prevail at trial and rejected the appeal leaving in place the settlement. In its decision the 11th circuit court footnoted that California case and explained that the 9th Circuit case was not in conflict with this decision. I’m not a lawyer, but my reading is that the 9th said Disney needs to actually find there are safety reasons to ban the Segway and the 11th said, Disney has already made those very findings, which allows us to uphold the settlement. It doesn’t go so far as to declare the 9th’s decision moot, but it might as well be.

The end result is that the settlement allows Disney to ban Segways and other two-wheeled assistive devices so long as it provides an alternative. I will note, that I still haven’t seen any of the new standing ECVs. It’s possible Disney was not allowing them in the parks either until the settlement was upheld.

Update: I spoke with Andrea Finger, Disney Media Relations Manager, about the court’s decision. “We’re pleased that the court approved the settlement,” said Finger. “We have long been at the forefront of providing accessibility for guests with disabilities. We look forward to offering a new standing mobility device that is compatible with our unique environment and helps maintain a safe environment for all of our guests.”