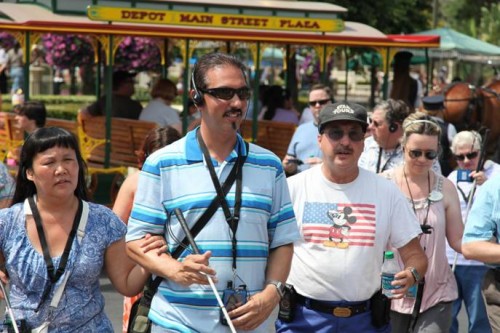 Audio Description services is just one of the ways Disney parks go above the requirements of the ADA to assist guests.

Petitions and lawsuits from disabled guests for Disney to allow access to its theme parks using a Segway are nothing new. Walt Disney World settled its Segway case in Dec 2008.  Instead of using a two-wheeled Segway, guests would be offered a four-wheeled alternate assistive devices (ESV) that would allow disabled who need to maintain a standing position to do so, while still navigating the crowded parks in a manner that is safe for everyone.

Meanwhile, Disneyland has been involved in its own lawsuit over use of the Segway as an assistive device. While the lower court issued Disneyland a favorable ruling, an appeals panel sent the case back to the lower court with the suggestion that Disneyland should study the use of Segways again.

What I find odd is that the 2008 settlement also stipulated that Disneyland would include the new ESV as an option for those who need to maintain a standing position. It’s been over two years and I haven’t seen the new standing devices here at Disney World. So I’m wondering what happened to the plans outlined in the settlement and why the current court case did not take that settlement into account.

More details on the decision over at the LA Times.