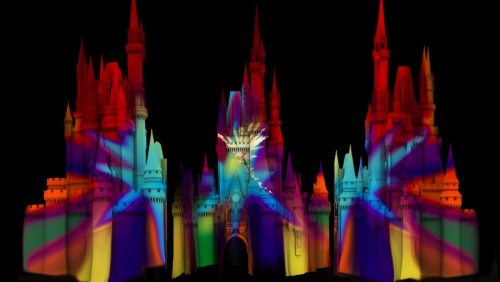 The digitally mapped projection show “The Magic, The Memories, and You!” has made Cinderella Castle at the Magic Kingdom and “it’s a small world” facade at Disneyland the center of night time attraction with its fun traipse through Disney’s hit films. But all good things must come to an end and it’s curtains for “The Magic, The Memories, and You!” For Disneyland it really is the end, but for the Magic Kingdom, Disney has announced a new show will take its place.

For awhile, there were rumors that the Magic Kingdom would get a Disneyland Paris style show with projects, water elements, and fireworks. But it looks that’s not happening by this November. Who knows? Maybe at some point in the future. For now we get “Celebrate The Magic” which promises to revisit favorite sections from the current show, but also introduce new elements.

“‘Celebrate the Magic’ takes us on a journey to the heart of the most beloved Disney stories and characters,” said Show Director Katy Harris. “This amazing show will magically transform Cinderella Castle with spectacular projection effects, choreographed to a new music soundtrack. The show will be full of emotion and storytelling, proving that, with imagination and magic in our hearts, anything is possible.”

Get your final “The Magic, The Memories and You!” fix on Labor Day, September 3, at both Magic Kingdom Park and Disneyland. While “Celebrate the Magic” will be exclusive to Magic Kingdom Park, Disneyland guests can look forward to the return of “it’s a small world” holiday. As as been previously covered, a new live entertainment experience will also debut in the Fantasyland Theatre sometime next summer.