There’s been a lot of talk recently about Team Disney Orlando’s slow realization that they have not one, but two under performing parks. In the past they could have skated by on the coat tails of the two main parks, but with growing competition from other parks in the region, that’s no longer possible. Each park has to draw a full days worth of guests on its own. To that end, Avatar has been marked for Disney’s Animal Kingdom and the rumor is that Disney’s Hollywood Studios is next up on the makeover list. Perhaps even an extreme makeover.

Therefore, I’m officially throwing my hat in ring with my script for Extreme Makeover: Disney’s Hollywood Studios Edition. Yes, I realize this is way out there in terms of possibility and there is no chance that the current management team would even consider doing something this extreme, but I think it would result in a much more enjoyable all day park. 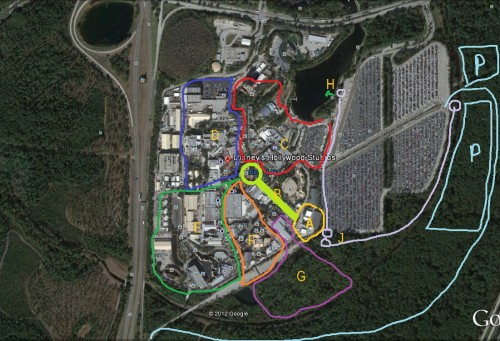 The first change is to give us some more real estate. I’d move the main entrance road a good 250 yards or so away from its current location and start work on two new parking lots to hold the cars that will be coming to see the amazing new park when its completed.

Secondly, I’d ditch the parking lot trams, they’re loud, offer no protection from the elements, and are never there when you need them. The replacement? A classic Disney mode of transportation – Peoplemovers (J). You could even go so far as building a Heathrow Airport style of podcars here and extend one run out to the Boardwalk area or even EPCOT.

The boat dock would switch sides (H) because the main entrance (A) would move to about where the parade warehouses is now. Buena Vista Street (B) would be installed like a California Adventure. The Red Cars would lead into Walt’s Hollywood (C) which keeps the current Sunset Blvd and puts a new kids land themed to Oswald and other early Disney creations, including Mickey and Minnie, in the former disabled and bus lots.

Rock-n-Roller coaster ditches the geezer band and replaces it with The Incredibles. The rest of the land is themed to Super Heroes. Disney could either draw upon Marvel’s vast catalog or pay off Universal and acquire the theme park rights to the Avenger characters. This would be a thrill focused section of the park.

Pixar Studios (E) would be expanded to take over the current backlot and Lights Motors Action area. Radiator Springs Racers and the town of Radiator Springs would also be added to this area.

The Muppets would break out of their theater and add a travel themed adventure through the former show building of the Great Movie Ride and the whole land around them would become the Muppet Studios (F).

So ‘jeah(tm)’, I know this will never happen. But my point is that Disney’s Hollywood Studios has the potential to become a great park. A lot of different themes fit within it its boundaries. The park has to grow beyond its history as an operating studio and become something more capable of competing with modern parks that rely as much on unique experiences as they do on storytelling.