Update Monday at 4PM: Debby is now predicted to soar across Florida north of Orlando slowly over the next five days. However, the storm is not forecast to grow into a hurricane strength storm. Disney has closed Typhoon Lagoon, but Blizzard Beach is open, of course, lightning or tornado warnings might change that . 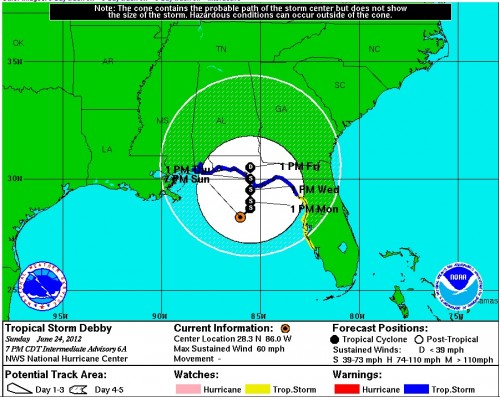 Currently moving slowly Northward in the Gulf of Mexico off Florida’s west coast, Tropical Storm Debby is wreaking havoc throughout the State tonight. Forecasted to move toward Texas a day ago, Debby chose to move North instead of West, bringing her ever closer to the Florida Panhandle. The current National Hurricane Center forecast has Debby moving onshore near Appalachicola, FL on Wednesday, at which point rainfall totals in the Panhandle could climb to near 2 feet.

As much of Debby’s mass is on the East half of the storm, this has the turbulent severe weather moving over the Florida Peninsula. Several Tornado Warnings have been issued near Tampa as well as reports of power outages and flooding in St. Petersburg, Clearwater, and other cities. As of right now, Orlando is on the fringe of Debby’s outer bands, which will still pack a punch. At 8:45PM, the National Weather Service in Melbourne, FL, reported a storm carrying winds of 50mph over Disney’s Animal Kingdom.

As Debby is only a Tropical Storm, Walt Disney World’s Hurricane Policy is not in effect. If you’re already there, actively keep an eye on twitter or local news stations for special weather bulletins. The Orlando area is feeling the effect of multiple bands of thunderstorms rolling through tonight. Parts of Central Florida are currently under a Tornado watch.

If you’re heading out to the parks, keep in mind that some attractions & shows won’t operate in heavy rain or wind. But you can still managed to have a great time. Just wear clothes that you don’t mind getting wet and cover up with a strong poncho (it’s worth the money for one with a little weight when the wind is blowing) or light rain jacket (although these tend to do poorly with all the humidity that’s in the air).

Daniel Ross earned his B.S. in Earth and Atmospheric Sciences from Georgia Tech. In his off time, he’s the Tropical Director for Foot’s Forecast, LLC.