Okay, Walt Disney Imagineering has worked on some pretty amazing projects before. There was Lucky the Dinosaur, himself a descendant of other self-standing dinosaurs that never saw a public appearance. There have been a host of ride systems they tested that never saw the light of day, and the line of cars that became Test Track and the Indiana Jones Adventure jeeps (let’s forget about Rocket Rods). But I don’t think I’ve ever seen something being tested that is so fantastic as this – a flying dragon. 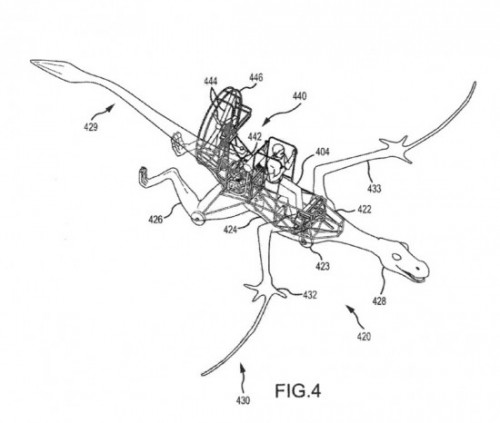 Okay, so it’s an ultra-light that has a body of a dragon, but it’s still wicked cool. The above image is a patent filed by Disney in March of 2010. Imagineers have been testing the device on an airfield outside of Bakersfield, California. And you can see photos of the craft in the Bakersfield Californian paper.

The timing of the patent and the shroud of secrecy that Disney had employees of the airfield swear to, has folks speculating this has to do with Avatar coming to Disney’s Animal Kingdom. I could see that. But I find it just as believable that it is a craft that will be used as part of Shanghai Disneyland’s opening ceremony. China has a rich mythology built around Dragons and having one at the opening of the first mainland China Disney theme park would be seen as a good omen. Plus the patent filing was prior to Tom Staggs deciding to contact James Cameron regarding licensing Avatar for Disney’s Animal Kingdom.

Anyone have the inside scoop?