Louis Gonzales is a Story Artist at Pixar and was part of the team that traveled to Scotland for research (it’s all relative, they had to travel to the dump for Toy Story 3). It sounded amazing. He told this great story about a small, simple dinner they had one night while in Scotland, and how a woman had started singing a haunting, beautiful song that really touched him. He was so inspired that he created a scene with a similar song. His version wound up being a lullaby sang to Merida by her mother. There was a whole process that he had to go through in order to have the scene added to the film. It involved his having to sing falsetto in front of the Pixar bigwigs, and from the sample he played us it’s lucky he has such a fantastic day job:

An aside: Before coming to Pixar Louis worked with Brad Bird on The Iron Giant. When I asked him about that his smile filled the room, which was just the answer I was looking for. Man, I love that movie.

Claudia Chung is the Simulation Supervisor and was responsible for dressing the characters in Brave. It’s not all about fashion, it’s also about functionality. For instance, Merida has 22 costume changes and they need to allow for the range of motion required by archery (sometimes Merida alters the outfits herself). What’s amazing is that there isn’t some app that puts clothes on characters like so many animated paper dolls, rather the individual pieces are built on the character, the gowns are gathered and sewn, the kilts are folded and draped (Fergus has 16 layers of fabric, which is how he stays warm in the winter months, seems like summer would be a bit sweaty). And then there is allowing for realistic movement. It’s a process, people.

One of the biggest challenges was animating Merida’s hair. In fact, it was so difficult that Merida’s hair was actually considered to be its own character and the Pixar team created a new process to make the hairdo, um, do. From Claudia:

The curls themselves are really tightly wound curls, but the movement of her overall curl is nice and soft. And there’s also these hairs that break away from her silhouette to show her wildness, her adventurousness, and that’s kind of the key look for Merida’s hair that we had to hit when we designed her. So, as a groomer, this is what I would see in the computer… I would take her scalp and basically grow curls off of her head and detail exactly how those curls grow.

The groomer who actually worked on Merida developed a new technique because she was like, “How do I get these curls that look the way the art director wants or the director wants?” She’s like, “I really need a curling iron.” So she actually built in the computer a curling iron where she could change the sizes of the cylinder, the length and stuff, so she could curl the curves around that.

The length of her curl, if you were to pull it straight, will measure out 4 feet long. Merida herself is only five four, so she has really long hair. It’s fifteen hundred hand-placed, sculpted curves. So that’s a lot of time in the wig-making process… all of these different colors (below) actually represent different layers of her hair, kind of like you would in Photoshop… in the end it’s a 111,000 curves that get rendered on her head.

Production Designer Steve Pilcher and Shading Art Designer Tia Kratter explained the steps between studying Scotland and working with different mediums in order to capture it accurately. They had a sample of their art hanging in the room and they walked us through the various sketches, models, watercolors, and finished scenes. There was a bunch of technical stuff, but for the most part it was just a love for story and an amazing amount of talent. The watercolors alone, which were made more for character development and artistic vision, were worthy of any wall in any museum. Brave is not lacking for awe-inspiring images, that much is certain. In fact, it may be Pixar’s best stuff yet. That’s right, I said it. 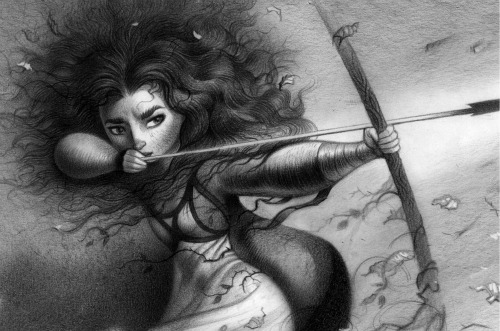 So how does Pixar do it? It’s their people. Yes, it is as simple as that. Pixar has a team of people on top of their game trying to take it even higher. It is inspiring, and it is working. Too bad they can’t bottle that sort of thing. I’d buy it.

Brave opens on June 22, and from what I’ve seen it looks incredible.

I was a guest of Disney/Pixar. Opinions are my own.