A Short Post About the Short Film La Luna

I have reviewed a lot of movies for a lot of different media outlets, including, but not limited to, the majority of Pixar films. However, I’ve never written a whole article about a Pixar short, and it is time that changed. La Luna is the reason.

La Luna was created, written, and directed by Enrico Casarosa, who had previously worked on Cars, Up, and Ratatouille, and it was nominated for an Academy Award (Best Short Film). It deserved it.

If you have ever wondered what it is like to be nominated for an Oscar, here is how  Casarosa described it:

I woke up and  I let all my family sleep, but I made myself a coffee and I was in the dark in the kitchen, trying to figure out where they would put it because they don’t really mention us little guys in the show.  You have to go look for it.  But once you find out…I love that moment of that quiet, personal moment of me and a cup of coffee.  Then it turned into text and then it’s a mess, and  emails of all these people kind of congratulating me.

So I really felt great,  the feeling of a nomination feels wonderful, but,  the thing I remember the most is just the outpouring from all over the place, people coming through the woodwork to say hi and congratulations, which is really great, and that kind of strange quiet moment.

It was not a bad day.

The story of La Luna runs seven minutes and does not use any spoken language, aside from shrugs, looks, and some mumbling that only the characters can understand. It’s a family thing.

The film covers the first night on the job for a little boy entering the family business with his father and grandfather. The men do not get along and the boy is forever stuck between them. 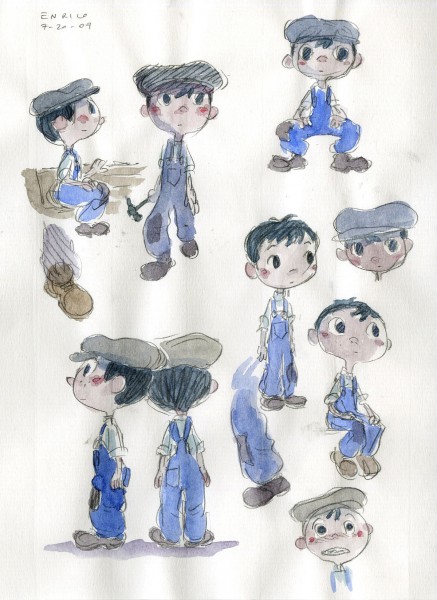 After seeing La Luna on a recent trip to Pixar Studios I was lucky enough to speak to Casarosa. Both were charming.

Casarosa explained that he found his inspiration in a very personal place:

When my grandmother passed we moved and lived with my grandfather. It was a small house. My dad and my grandfather weren’t getting along. Roughly 25 years ago, in that kitchen, it would have been a lot like what you see in the short.

I would always feel stuck in the middle, so I thought that was interesting… that there were some good things to explore and a boy having to find his own way when there’s two forces kind of telling him “do it this way, do it that way.”

So it’s a lot about kind of finding your own path.

There were other sources of inspirations as well:

One is Saint-Exupery in the Little Prince, I always loved it growing up.  And Hayao Miyazaki is a big influence on my work, you know.  I kinda study and love his work, and he has this kind of wonderful, kind of surreal, fantastic with very real small details, you know?

The last kind of inspiration is Italo Calvino.  He’s an Italian writer that we read growing up. It’s very surreal work and he had one story with a ladder to the moon, and in that story, specifically, they were, I think, getting milk from the moon. It got me thinking, wouldn’t it be fun to kinda come up with my own strange child-like myth of what someone could be?

They could be anything, and La Luna makes it happen.

La Luna runs before Brave and both films open on June 22.

I was Disney/Pixar’s guest at Pixar Studios. All opinions are my own. Photos courtesy of Pixar.

previousDisney is back at the Tony Awards, collects 7 statues
nextImagineering the Sounds of Radiator Springs Racers