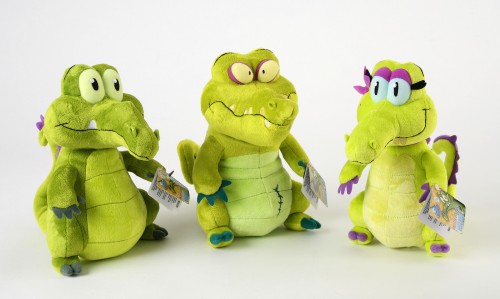 Disney Mobile and Disney Consumer Products announced earlier today a major new line of merchandise based on Where’s My Water?, Disney’s hit game for iOS and other mobile platforms.

Available now at the Disney Store (in store and online) are plush toys of the game’s star, Swampy, and supporting alligators Cranky and Allie. More new products will become available in the U.S. next month.

A second wave of merchandise, arriving this fall, will expand the line to include a physical game, stationary, home accessories, and more.

Disney is obviously taking on those hungry green pigs in the mobile franchise consumer products space. Taking advantage of Where’s My Water‘s popularity is a no-brainer.

Since launching in September 2011, Where’s My Water? has hit the No. 1 spot on Apple’s iOS App Store in 80 different countries. Later this year, Disney will debut a 12-episode web series titled Where’s My Water?: The Adventures of Swampy.

Can a feature film be far behind?