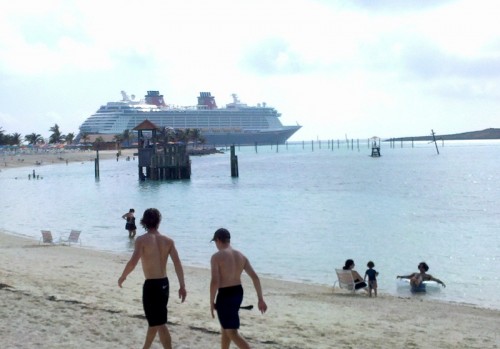 After a beautiful sail out for the Disney Fantasy and some speculation as to the eventual disposition of the Disney Wonder, everyone was waiting for the next shoe to drop. Now it has. We have the official word that in 2013 the Disney Cruise Line will use a Miami port for some cruises, making for the first time two Florida ports were in simultaneous use. Additional ports include Barcelona, Spain and Galveston, Texas.

With the addition of the Disney Dream and Disney Fantasy to the fleet of cruise ships, Disney Cruise Line is able to take more families to more destinations around the world. Disney Cruise Line has always catered to the unique vacation needs of families, and next year will be enhancing the cruise options for guests — whether it’s sun and sand in the Caribbean, outdoor adventures in Alaska or experiencing the wonders of Europe.

Highlights of the Disney Cruise Line 2013 schedule (which can be booked beginning Jan. 23, 2012) include…

Beginning June 1, 2013, the Disney Magic returns to Europe with plenty of new twists to the Mediterranean itineraries, including a four-night option and special 12-night sailings in addition to seven-night itineraries that treat guests to the best of Europe during the three-month season.

The new 12-night sailings visit destinations such as Venice, Italy, and Croatia’s Dalmatian Coast on one itinerary and Ephesus, Turkey and the Greek Isles including Athens, on another. Each itinerary will offer a sailing departing in June and another departing in July.

Bahamas and Western Caribbean from Miami

Disney Cruise Line will sail from Miami for the first time on Dec. 23, 2012. One six- and one seven-night Caribbean sailing aboard the Disney Wonder will set the stage for a schedule of four- and five-night cruises from Miami to the Bahamas and Western Caribbean between Jan. 5, 2013, and May 2, 2013. The four- and five-night cruises have a variety of itineraries. Ports of call may include Cozumel, Mexico; Grand Cayman; Key West; Nassau, Bahamas, and Disney’s private island, Castaway Cay.

The itineraries offer families magical days at sea to explore all of the fun aboard the Disney Wonder and days in port to lounge on warm, golden beaches, to swim and snorkel in azure waters or to shop to their heart’s content in exotic marketplaces.

Rates for four- and five-night cruises departing from Miami start at $440 per person for a standard inside stateroom, based on double occupancy.

The Disney Magic, which will begin sailing from Texas in 2012, will continue to sail from the Port of Galveston through May 2013, to the Western Caribbean.

Beginning May 27, 2013, the Disney Wonder will sail seven-night cruises from Vancouver to Tracy Arm, Skagway, Juneau and Ketchikan, Alaska.

Rates for seven-night Alaska cruises departing from Vancouver start at $1,015 per person for a standard inside stateroom, based on double occupancy.

Caribbean and Bahamas from Port Canaveral

The Disney Fantasy and Disney Dream will continue to sail a variety of Caribbean and Bahamian itineraries departing from Port Canaveral.

Rates for seven-night Caribbean cruises on the Disney Fantasy start at $1,085 per person for a standard inside stateroom, based on double occupancy.

The Disney Dream will sail three-, four- and five-night cruises from Port Canaveral to the Bahamas and Disney’s private island, Castaway Cay.

Rates for three- and four-night Bahamian cruises on the Disney Dream start at $450 per person for a standard inside stateroom, based on double occupancy.

Disney Cruise Line and Adventures by Disney will offer families unique land and sea experiences in the Mediterranean. Available on select departures, guests can maximize the magic with three-night or four-night pre-cruise Adventures by Disney vacation itineraries in Barcelona and Madrid. These immersive add-ons allow families to envelop themselves in the culture of the region with VIP access in the most-sought-after tourist destinations – such as the Sagrada Familia Cathedral in Barcelona and the El Prado museum in Madrid – as well as hands-on lessons in archeology, flamenco dancing, local cuisine and stained glass crafting. Each Adventures by Disney departure is led by knowledgeable Adventure Guides who handle all the planning logistics so parents can relax and enjoy quality time with their family.

Families can also enhance seven-night and 12-night Mediterranean sailings with Adventures by Disney Onboard Experience packages. Throughout the voyage, guests will have access to exclusive Adventures by Disney activities and concierge service from dedicated Adventure Guides. These guides will also lead travelers at each port, helping them unlock the wonders of each destination through exclusive excursions and off-the-beaten-path adventures. Specific itinerary and pricing information for the 2013 Adventures by Disney experiences will be available in March 2012.