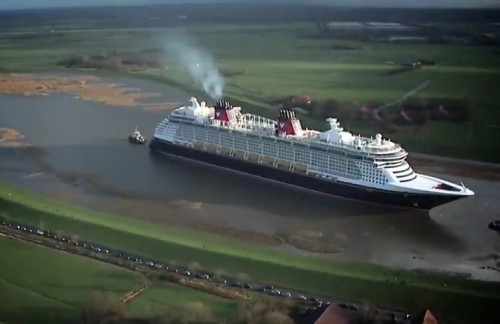 Papenburg, Germany the town where Meyer Werft built the two latest Disney Cruise Line ships is 30-miles inland down the winding Ems River. This requires a process known as ‘convenyance’ when the ships are floated out to open sea. Disney’s newest ship, the Disney Fantasy, departed on its conveyance on January 20th.

Here’s a video showing just how delicate and complex a maneuver it is. I also like how members from the community, some of whom worked on building the ship, line up along the shore to watch and cheer as the ship makes its way to see.

I’m sure this was a bittersweet day for the folks at Meyer Werft. They’ve been working on a Disney cruise ship in one way or another since 2007 and actual construction has been going on since 2009. With that length of turn around, I wonder if Disney isn’t already on the horn to Meyer Werft placing an early order for the next two ships. Do you think Disney should continue to grow it’s fleet?

The Disney Fantasy departs on its maiden voyage March 23rd.