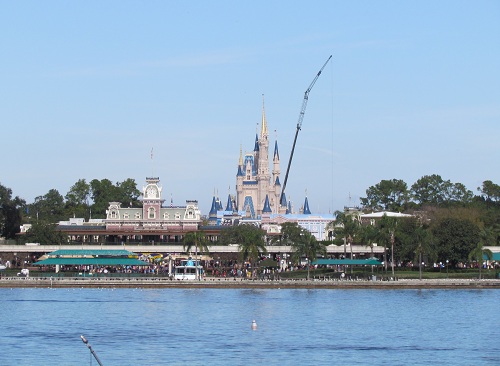 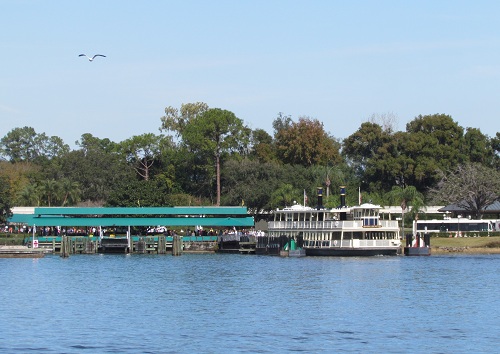 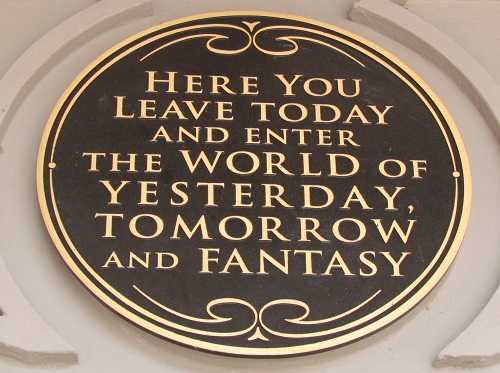 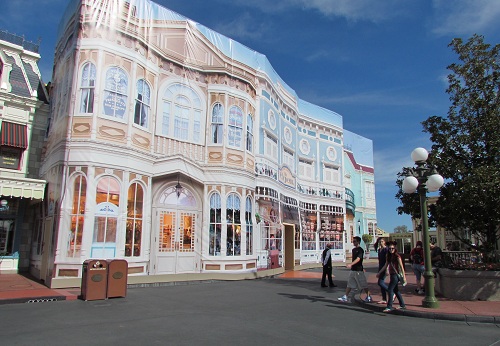 Did I say magic? I meant vinyl tarps. Well, at least this is better than the brown tarps we saw last weekend. 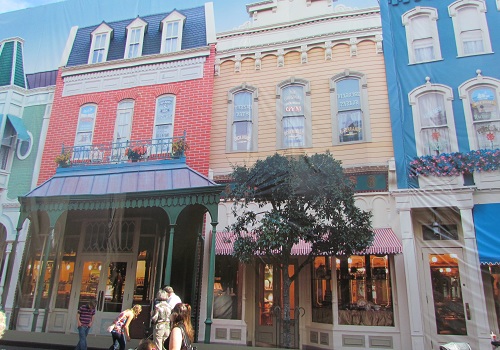 More Vinylmation, er tarps. I’m starting to think that they could just build a whole replica Magic Kingdom out of these vinyl tarps. Sort of like the fake town in the classic movie Blazing Saddles, only we could charge $80 a day for foreign guests to visit instead of blowing it up. I’m sure they’d never know the difference. The real MK could then get all its refurbishments done at the same time instead of dragging it out over years. 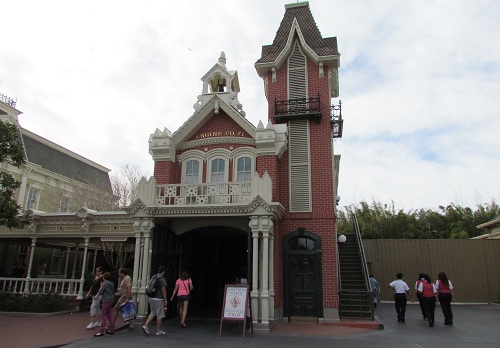 Sorcerers of the Magic Kingdom was open for testing today. I’ll have a separate post on this later this week. In short, I think it has potential. 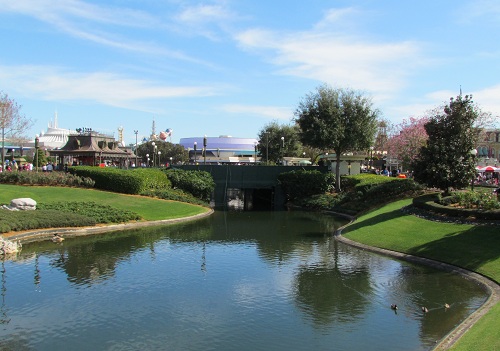 The bridge over the castle moat was getting some TLC. Weirdly the parade was limited to going up and down main street, and around the hub. But no problems with the bridge here. Instead it was for a different reason we’ll see later. 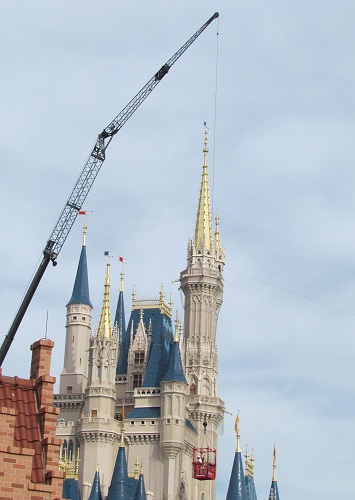 Here’s the reason that crane was up. Time to take down the Christmas lights from the castle. 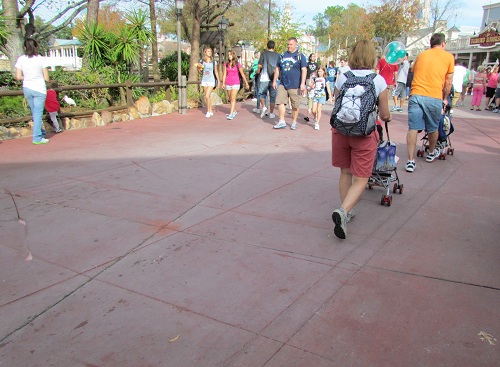 Here’s the reason the parade was limited to Main Street and the hub. They’ve cut large sections of the pavement in Frontierland. Looks like they’re planning on fixing the slope here. It’s a little steep for some of the parade floats. A more gentle angle will be better for every one.

This video is from Kevin Yee. It shows a very unfortunate piece of bad show. Every animatronic on the whole finale boat in Splash Mountain is broke. This is awful. At some point you have to shut down the ride until you can make it show ready again. I think they’re definitely past that point here. Anyone know if this was a short term thing or part of a larger problem? 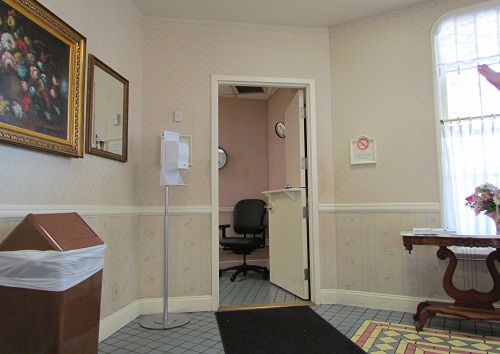 For reasons we won’t go in to here, we made multiple visits to First Aid today. The nurses there are always pleasant and exceedingly helpful. The biggest problem is this horrible door/counter situation. Lately the nurses have taken to just greeting guests out in the foyer instead of behind the counter. But wheelchairs still have a very difficult time navigating the turn and it means there is a lot of walking around and disappearing backstage instead of staying with guests. I’d really like to see this fixed with a counter similar to what they have at EPCOT Center’s first aid station. . 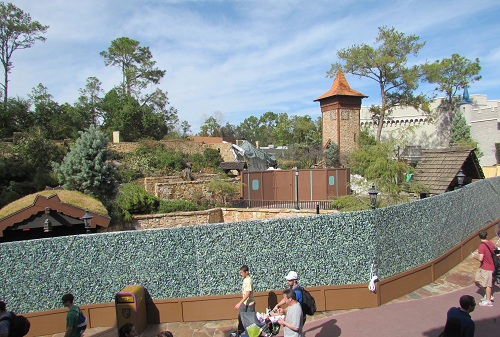 On to Fantasyland where the new restrooms are expected to open later this year. They’ve finally started some serious earth moving behind the tarps they added last week. The addition of these restrooms will allow Imagineering to fix the dreaded Peter Pan queue. So we’re all looking forward to that. 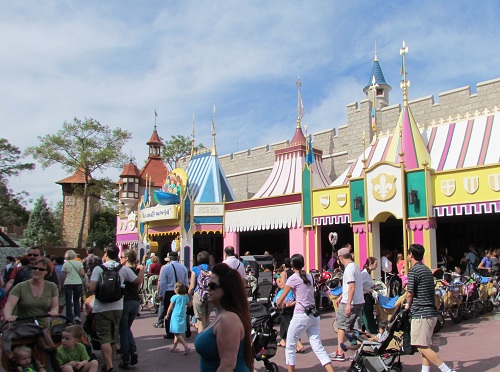 The closure of the stroller parking has necessitated some wider distribution of the kid carriages. Here they’re taking up about half of the walkway. Not too bad as far as a traffic impact. But I could see it getting a lot busier and the strollers could become an issue. 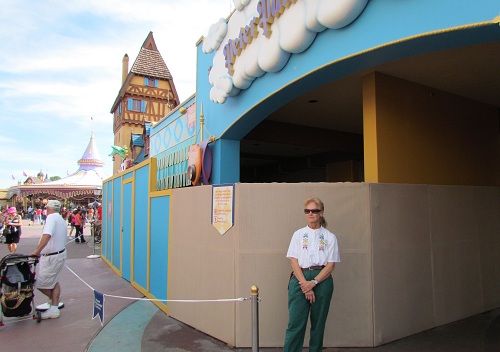 Work is already underway on the Fast Pass side of the queue for Peter Pan. The cast member said this was not related to adding any interactive elements. 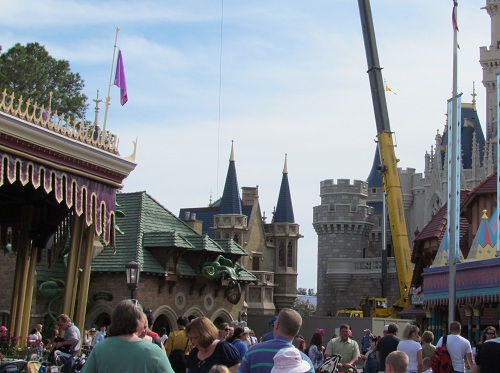 One last shot of that crane. It’s parked pretty much in the wide open behind the castle. Why can’t they put one of those vinyl tarps up here to hide this yellow monster?

Thanks for making it this far. Part two will focus largely on the new Fantasyland construction. Even after Dumbo closing, there’s a lot to see.