Yesterday morning, hundreds of Disneyland Resort cast members posed in the courtyard of the reimagined Disneyland Hotel to mark the end of the historic hotel’s multiyear renovation. Final touches to the porte-cochere and tower lobbies were added this month, following more than two years of work by Disney Imagineers and cast members to reinvigorate the hotel into a family destination that pays tribute to the early days of Disneyland.

Guests now enjoy completely redesigned guest rooms, a new courtyard, restaurant, bar, pool and water play area, as well as themed suites and a dramatic new look to the exterior of the hotel. Changes have restored and highlighted the hotel’s original midcentury style with sleek, modern amenities. For the first time in 25 years, the Disneyland Hotel earned a coveted 2012 AAA Four Diamond award. Many fans have bemoaned the loss of lots of the history associated with the original version of the Disneyland Hotel. But Imagineers have been careful to make sure the new hotel is just as layered with details, if not more so, than the original. For instance, it may not replace the huge waterfall of the old hotel, but this geyser and waterfall pays tribute to the Mine Train through Nature’s Wonderland. Love that. 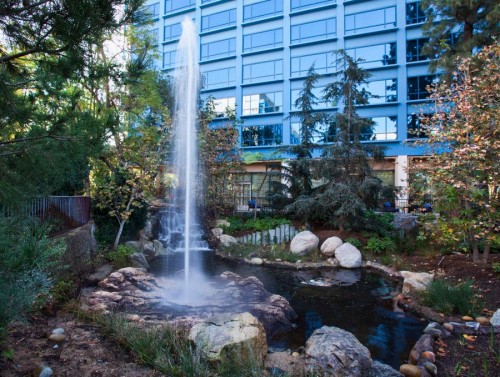 What do you think of the new Disneyland hotel. What’s your favorite part to visit?