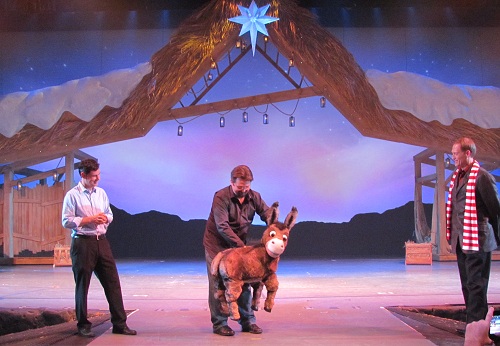 Last year SeaWorld went all out for Christmas with a new Sea of Trees holiday lights show and decorations that rivaled anything Disney offered. The best part was that on the nights SeaWorld was open for Christmas, it was included with your regular admission. All that remains true in 2011, but they’re adding a show meant to bring a bit of Christmas tradition, similar to Candlelight Processional at EPCOT, to SeaWorld.

O Wondrous Night – The Story Greatest Never Told is a living nativity show that tells the Christmas Story through the eyes of the animals that were there. Think Finding Nemo – The Musical with nativity animals instead of fish. It promises to be a light-hearted and glorious celebration featuring a host of angels, animals and the true glory of Christmas.

The Disney Blog was invited in to get a taste of the show before it debuts on Nov 25th along side the rest of SeaWorld’s Holiday celebrations. Here’s a little video we were able to capture:

The 30 minute show will feature a magical moment where puppets are replaced by their real life counter parts. Songs were chosen to appeal to the young, with a Glee-like sensibility. The show will run twice per evening on the nights SeaWorld offers its Christmas Spectacular. It is staged in the 2,500-seat Nautilus Theater, home of “A’lure — The Call of the Ocean” show, which will continue still be seen during the day.

More about SeaWorld’s Christmas Spectacular below the jump:

Winter Wonderland on Ice is an ice skating extravaganza where Christmas comes to life through towering water fountains, magnificent fireworks and some of the most talented ice skaters in the world. This is a don’t-miss, holiday sensation.

SeaWorld invites guests to experience the grace and beauty of our Shamu family at Shamu Stadium, during the night-time show, Shamu Christmas … Miracles. Thrilling seasonal music rings out as killer whales soar through the air in a performance that will take the audience on a stirring voyage into the heart of the holidays.

Clyde and Seamore’s Countdown to Christmas features Santa’s helpers, Clyde and Seamore, who are bringing their own brand of comedy to Christmas this year. Our loveable sea lions, along with a few mischievous otters, a comical elf, and a wintery walrus or two, search for Santa.

A Sesame Street Christmas is a festive and fun musical celebration that will have the little ones smiling all the way home. Through dance, laughter, and interactive sing-a-longs, Elmo, Telly Monster and the rest of her Sesame Street friends teach Abby Cadabby what Christmas means to them.

Now boarding! At the park’s Wild Arctic attraction, guests embark on a heart-warming journey to the North Pole aboard the THE POLAR EXPRESS Experience. Discover the sights, sounds, and smells of the season as family and friends are immersed in the dazzling wonder of this beloved holiday classic. Upon arrival at the North Pole, guests can meet Santa Claus himself, and encounter astounding animals in a wintery wonderland.

The amazing Sea of Trees has been expanded to include 100 massive trees, each sparkling, lighted and choreographed to classic holiday tunes, making a dramatic display around SeaWorld’s center lake. Here’s a new video that shows the making of “Sea of Trees”