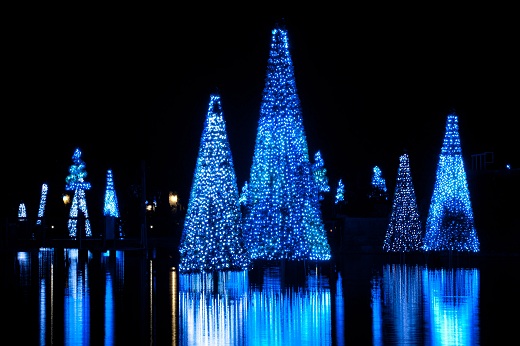 For the last four years SeaWorld Orlando has assembling all the parts required to have the best Christmas Celebration in Orlando. This year, with the addition of the Sea of Trees, the final part slid into place. The celebration runs Friday-Sunday and then nightly starting December 17th through January 2nd. There is no separate admission, everything is included with your ticket.

Just walking from the main entrance to the Skytower, I saw more lights, more decorations, more entertainment groups than at any single Disney theme park. Even on the way out at night there were at least two music groups playing holiday tunes to keep your spirits bright. It’s safe to say that with it’s current line-up the SeaWorld Christmas Celebration is the best value in town for your families vacation dollars. 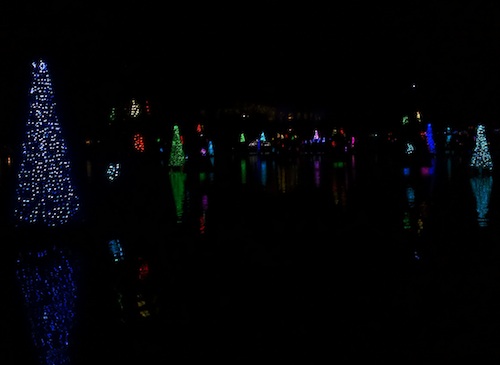 Sea of Trees is a huge installation with multiple performances throughout the night, including a show synchronized to the Holiday Reflections Fireworks show. The display includes 75 massive trees, each sparkling, lighted and choreographed to classic holiday tunes, making a dramatic display around SeaWorld’s center lake. Over 4 tons of lights, 8 miles of cables, and 159,000 individually controlled lights help make this a beautiful show. I watched it from three locations and most enjoyed it from the bridge that runs right through the center of the trees.

Here’s a video I took of the show. It’s a little show at the start, but really gets going. Seeing it in person is even more impressive:

Also new is The Christmas Market, located on the park’s Bayside Pathway. Here you can shop for one-of-a-kind gifts and dine on scrumptious holiday delights. This area is a must-see, unfortunately it’s not for a unique shopping experience, but for the amazing raining lights that hang down from the old trees along the pathway. The four Holiday shows are the same as last year, but with a few updates. The ice-staking show has a newly recorded score with an additional song. Also the ice rink is a little larger allowing for more spectacular tricks from the performers. Shamu’s “Miracles” show has changed now that trainers aren’t allowed in the water. While the animals are as majestic as ever, this show needs a reboot along with the ‘Believe’ show. 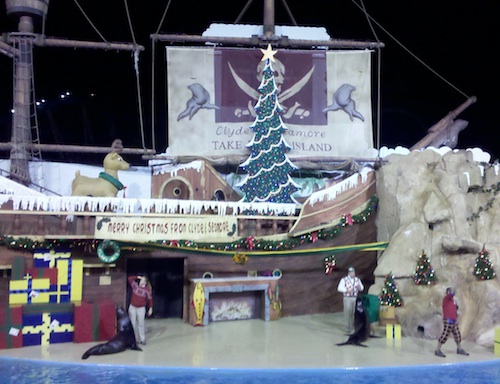 Clyde and Seamore’s Christmas Countdown was the surprise hit of the night. There was a lot of humor, a few new tricks from Opie the Otter, and some great stage design that drove the show. They even work the Mime into the show a bit. The performance by the head elf really made the show with his delivery of the corny jokes and rhymes.

We caught the final Winter Wonderland on Ice of the evening and were treated to a spectacular show where Christmas comes to life with towering water fountains and some of the most talented ice skaters in the world. It was very good for a theme park skating show, with four featured performers and a really talented group of precision skaters. An added bonus for seeing the last show is that you can just stay in your seats and have the absolute best view for the nightly fireworks show.

If you feel compelled to do a little shopping while at the park, you’ll be able to pick from over 700 seasonal pieces of merchandise, many at very affordable prices. Your family may also enjoy the all you can eat experience of “Santa’s Fireside Feast”. You get the traditional meal, plus entertainment from Santa’s Elves and Mrs. Claus. Finally, the big man himself makes an appearance, tells a story, and then is available for photos and sharing your wish list.

What impressed me about the evening was the attention to detail SeaWorld’s entertainment crew put into their shows. The park has really matured over the last year and seems poised for continued improvements in the future. The value compared to Disney is really growing, especially when you through in the extended hours for the Christmas Celebration and any admission discounts you might be able to obtain. I definitely plan to head back this year and take it all in again.