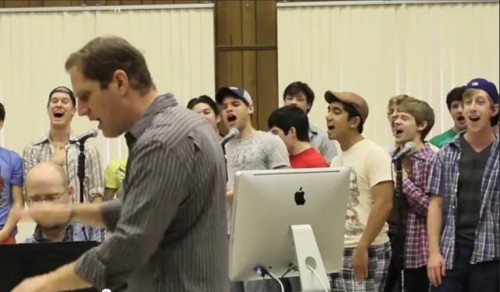 Newsies, a new stage musical from Disney Theatrical, has officially started ‘previews’ at the Paper Mill Playhouse. This is a day many thought would never come. Newsies, the movie, has had a huge cult following who could be heard begging for a stage musical version of the film and now it’s actually happened. It’s like the people at Disney are actually listening to the fans. I mean, come’on. That never happens.

And yet, not only is Disney producing Newsies, they’ve hired some of the most talented artists to produce and star in the play. With names like Harvey Fierstein, Jack Feldman, and legendary composer Alan Menken how could they wrong, right? Even better, they’re doing an excellent job teasing the fans with videos of rehearsals and interviews with those involved.

The latest video is of something called a Sitzprobe. Apparently that’s the day of rehearsals when performers first work with a full orchestration. There are just a few clips here, but what they’ve included sounds amazing. Very much in the spirit of the original movie — powerful and energetic.

If you happen to live near the Paper Mill, here’s a page with details about how to get tickets and an Oct 2nd Fan Day. For those of us who have to wait for either a tour or local production, here’s the Newsies Facebook page.