Pixar Up House – How did they do that? 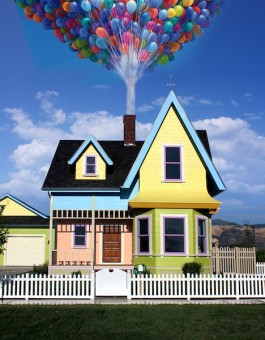 The Salt Lake City Parade of Homes 2011 featured a home that replicated the iconic home from Pixar’s hit animated film “Up!” It’s drawn a lot of attention here, and elsewhere. It’s even officially licensed by the Walt Disney Company. That in itself is a miracle.

As it turns out, to make a project like this happen, it pays to have family and friends in high places. That’s just how the Bangerter’s did it. Not only is the developer the son of a former state governor, has a lawyer who worked in the entertainment industry, but they had help from within Pixar.

the Bangerters had a powerful ally: Pete Docter, the director of “Up,” who personally intervened on behalf of the project, a studio executive with knowledge of the transaction said, on condition of anonymity so as not to contradict his employer’s stance.

Somehow Mr. Bangerter’s detailed architectural drawings made their way to Mr. Docter’s desk at Pixar. Touched that his film had inspired such an elaborate reaction, he asked the company to make it happen, according to the Disney executive.

This little bit of inside baseball was revealed in a NY Times article today. There’s more to the story too. Over 27,000 people paid $10 to visit the house during the parade of homes. Most of that went to charity. Apparently, the home is still on the market and accepting bidders. The price starts at $399,000, fully furnished just like in the movie. I think I’ll take up a collection.