Real Life “Up” House for sale in Herriman, Utah 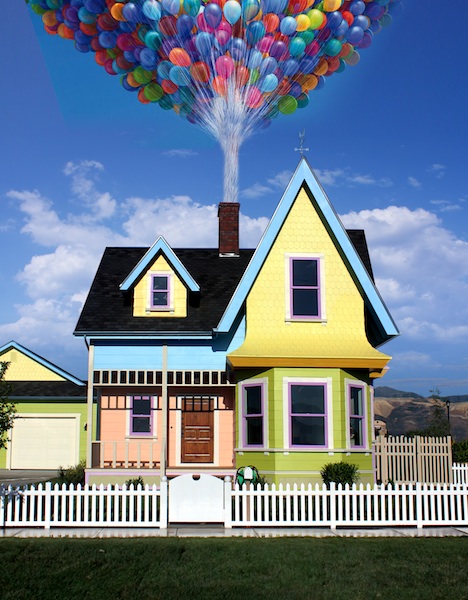 Bangerter homes, in conjunction with the the Salt Lake City Home Builders Association, has come up with a great way to get visitors, and potential buyers, to their Parade of Homes event, they’ve recreated a full scale version of Carl and Ellie’s house from Pixar’s animated feature “Up.” The home comes with many of the fun details you find in the movie along with some more modern updates. Disney/Pixar even gave the developer their blessing to build and sell the home.

The home is stationary, but built with all the regular features and functions of a home. As only a couple rooms were depicted in the movie, the developer has used their imagination when adding other rooms (which include extra bedrooms and a movie theater). The living room and one bedroom have murals being painstakingly replicated from the movie and the house will come with a fireplace and armchairs similar to those used by Carl and Ellie in the movie.

With those extra rooms and a finished basement, the home clocks in at a respectable 2,800 square feet and is expected to list for $399,000. Okay, fans of the movie “Up”, are you ready to move in? If all you want to do is take a tour, the Salt Lake Parade of Homes site is www.saltlakeparade.com

We’ve added more photos of the “Up” home here or check out the Salt Lake Tribune article.

I also recommend this terrific book: The Art of Up (Pixar Animation)

for fans of the movie.

(Photo (with balloons added in) by David Christenson.)