State of the Magic Kingdom 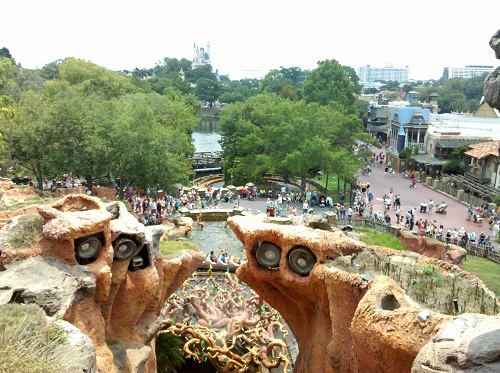 I was talking with someone this weekend about the sad state of Splash Mountain, I’m sorry I can’t recall who, and the discussion turned to Magic Kingdom’s VP Phil Holmes. Apparently, Phil believes that the park has serious capacity issues to the point where only one major attraction can be down at a time for rehabilitation. This creates a problem when an attraction like Splash Mountain is in serious need of rehabilitation, but they can’t close it or risk coming in under the rides per capita goal, either 8 or 9 rides a day per guest depending on the years budget. Disney arrived at that 8 or 9 number by surveying guests to estimate the optimal number of attractions visited a day to create a ‘positive’ memory of their day in the park. I would really like to see that at 11 or 12 rides per capita, especially considering the price of visiting the parks for a family of four. 8 or 9 seems like barely a half-day park to me.

Now, with Fantasyland Construction underway, the Tiki Room closed due to fire, the sad fact that no brand new attractions have opened at the Magic Kingdom since the Magic Carpets of Aladdin opened in 2002. (MILF opened in 2007, but that replaced an existing attraction so it doesn’t count), and the state of parades and shows that is so horrendous they are no help in increasing capacity, it is impossible to close another attraction unless there is a safety reason. Essentially, by Phil’s logic, the fact that we’re getting the Tiki Room restored to glory, means we have to live with other attractions (Splash Mountain and Carousel of Progress) falling apart. We shouldn’t have to make that Sophie’s choice.

The obvious answer is to increase capacity to a point where these sorts of repairs can occur ahead of when they’re needed instead leaving bad show to fester until such a point of time when rides per capita won’t be affected (basically during low crowd season). In other words build excess capacity into the system so you don’t have to run on the edge all the time.

We are finally getting a partial solution to Phil’s problem. A new attraction (Under the Sea: Journey of the Little Mermaid) is part of the Fantasyland expansion and the Dumbo attraction will theoretically be able to double its capacity (assuming they run both rings all day, a habit I can see operations ending quickly to reduce labor costs). I’m unsure if we can count the new Snow White Dwarfs Mine Ride since they’re killing Snow White’s Scary Adventures to build it. But even if we give them some credit for the coaster, it’s still not enough. It’s going to take more than one and a half new attractions (and Mermaid is a C or D ticket at that) to solve the Magic Kingdom’s capacity problem.

But Phil is not powerless. He can immediately solve this problem by adding shows, which are huge capacity sponges. The Diamond Horseshoe Revue is empty and StoryBook Circus is the perfect venue for a big tent themed stage where Kids of the Kingdom type shows can be produced (this also solves the problem of having shows in front of the castle where there is no shelter from the hot sun or rain) starting in 2012. Sadly the Tomorrowland stage is completely useless with its lack of shade and seating. The decision to remove the Galaxy Theater to add some executive parking is one of the worst decisions in the last 20 years.

The park also needs an immediate replacement for both the afternoon and night time parades. That’s a big enough event they should be able to make a whole year long promotion out of it in 2011. I don’t care if they just assemble assorted abandoned floats from the parks around the world. Just produce something that’s not old, tired, and rolls by in under 8 minutes as the current 3pm parade does. While they’re at it, night time parade technology has improved a lot since 1978, but that’s essentially the same technology we have with Spectromagic and MSEP. Steven Davison help us please!

Finally, Phil needs to immediately put into place a rescue plan for Tomorrowland. (Although that steampunk roller coaster idea for Adventureland is pretty cool too.) Evict the cartoon based life-forms and re-ignite excitement for a future that involves space exploration, new technologies that make our future easier, and some visionary ideas too.

My suggestion is to round up Cory Doctorow, Charlie Stross, and Bruce Sterling (although I still haven’t forgiven him his insult, he is a terrific author and speaker), a few of today’s leading science fiction authors. Doctorow is a huge Disney fan and has a good track record with YA novels that also make a difference. Stross has that knack for peering into the future and building something plausible based on today’s existing trends. Sterling is an established authority on the very near future, a talented author, and someone who probably has something to say about Disney’s Next-Gen (NGE) experience. Get them all in a room with some Imagineers and sketch out plan for updating Tomorrowland with a theme and attractions that will draw crowds for 20+ years.