Designer Thom Shillinger worked at Walt Disney Imagineering during an exciting time. Unfortunately most of the excitement came from layoffs and projects that were blue-sky and never greenlit. One of those projects was known ans Project Meadow and Shillinger has put up some of his concept drawings for the attraction on his blog.

It appears to have gone through a couple variations in theme, but I’m really excited by some of the Steampunk elements Thom worked into his concept art.This Dutchman style seat has Jules Verne overtones for sure. 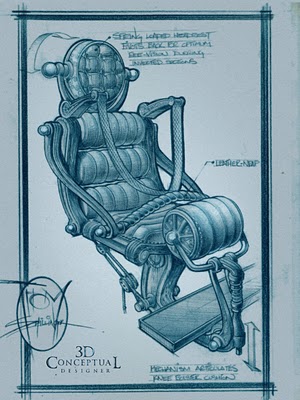 The coaster, if it had been built would have added another ‘Jungle Ride’ to Paris Disneyland’s Adventureland. Hey, the Magic Kingdom in Orlando could really use another coaster or, with some small theme changes, this could work in Disney’s Animal Kingdom too.

See more Project Meadow at his blog as well as other great designs by this talented artist. It looks like he did some 3D modeling work for Disney’s Treasure Planet (one of Disney’s hidden Steampunk treasures, if you ask me). Disney’s Virtual Magic Kingdom fans will want to search Thom’s archives (Jan 2010) for his concept art for that game.