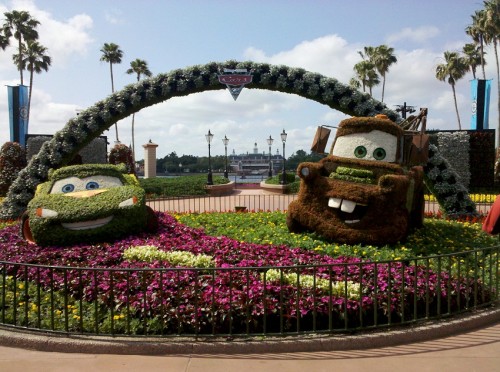 Does the idea of Pixar films and flowers coming together sound dreamy to you? Well then you’ll be happy to lose yourself in the world of Pixar films at Pixar’s 25th Anniversary Weekend coming May 13-15 as part of the Epcot International Flower & Garden Festival at Walt Disney World Resort. Celebrate Pixar with exciting activities, special character appearances and a speaker series with Pixar insiders.

Disney has just opened up free seat reservations for the Saturday and Sunday talks featuring experts from Pixar. So if you’re planning on attending, drop what you’re doing now and register over at http://www.pixarweekend.com.

Now, go get your seats if you haven’t already.

Thoughts on why this isn’t at Disney’s Hollywood Studios and more details about the weekend below the jump:

With a whole section of the park at Disney’s Hollywood Studios themed to Pixar Studios, one wonders why this event isn’t being held at DHS. Yes, it’s a nice way to end the Flower and Garden Festival, and yes, Epcot has a number of venues that are perfect for events like this. So, let’s see how it goes this year, and hope that it becomes an annual event.

Aside: another event I’d like to see is an ABC/Disney Channels all-star lineup weekend.

More details from the weekend below:

World Showplace, located between the Canada and United Kingdom pavilion, will serve as the celebration weekend headquarters.

Here, you can meet even more Pixar favorites:

PLUS… Browse a photo gallery that reveals some of the best “Easter Eggs” from Pixar films, and explore the art gallery for a behind-the-scenes look at the incredible creative work that goes in to Pixar films.

Does this sound like a great event to you? It does me. Can’t wait to go.