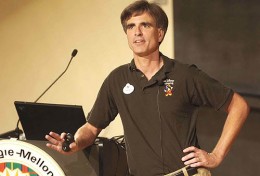 When I first saw the video of Randy Pausch’s “Last Lecture” entitled Really Achieving Your Childhood Dreams, I was doubly impacted, not just because we shared a dream, become an Imagineer, but because his work has made an incredible impact at the non-profit I work for and his loss would be deeply felt. Sadly, Pausch died this morning at age 47 after fighting terminal Pancreatic Cancer, one brick wall that very few people ever conquer.

His death was much too soon but Pausch leaves behind a family and a community that is richer in the things that really matter in life. More than 10 million people have watched his video, probably much more since YouTube notoriously undercounts embeded videos. If just a small percentage of those viewers internalize the lessons of that video, the world will be a much better place.

I’ve included the full video of his “Last Lecture” speech here. I just watched it again and soaked up new inspiration. I hope you’ll take an hour to let a little of Pausch’s important message into your life.