The El Capitan Theatre in Hollywood is the pinnacle of the Disney movie watching experience.  It is old Hollywood meets new, with restorations to both the exterior and interior, and equipped with Dolby SR-D digital sound, film and digital projectors, and 3-D capability. It is a Disney stage production.  It is excellent ice cream.  What’s not to love?

The El Capitan is located in the heart of Hollywood, right across the street from the Kodak Theatre- you know, the Academy Awards place.  It originally opened in 1926 as “Hollywood’s First Home of Spoken Drama.”  In the ten years following its opening it featured over 100 stage productions starring the likes of Will Rogers, Joan Fontaine and Clark Gable.  In 1941 Citizen Kane made its World Premiere at the El Capitan Theatre.  Basically, the place has history.

The store portion is basically a small Disney Store with DVDs and character merchandise, but with a strong emphasis, including theming, on the film currently featured in the adjacent theatre. 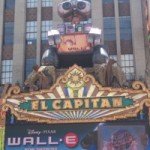 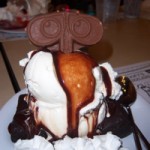 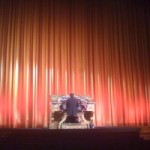 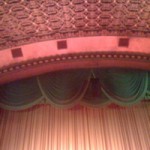 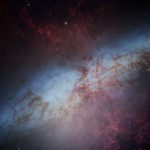 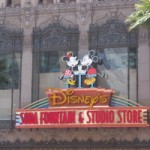 One of the cool things about the theatre is that they overlay everything to fit the movie, and by everything I mean from the marquee to the ATM (it was space-themed, not a robot).  This is carried next door into the ice cream parlor where my son and I shared a WALL-E sundae, and by share I mean I had two bites and he went into a sugar-fueled eating frenzy (see above).

For WALL-E the El Capitan teamed with NASA and JPL.  The lobby was decorated in models and information regarding various satellites, robotics, and other milestones of space exploration.  It was out of this world (sorry, I couldn’t resist).  WALL-E runs through August 27th.

Prior to WALL-E there was a live stage show that incorporated scenes from classic Disney/Pixar movies into dance numbers featuring the characters from the corresponding films.  The show is called “Disney’s Flight of Fantasy” and the crowd went wild.

My family and I had a blast and I can’t recommend the experience enough.  If you’re visiting for a Disneyland Resort vacation you should really consider adding this to your itinerary, and if you’re local you’ll appreciate this: clean bathrooms in Hollywood.  That’s the Disney touch.

You can call 1-800-DISNEY6 or visit www.elcapitantickets.com for tickets and information.