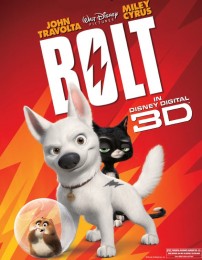 My family and I attended a showing of Disney’s latest feature Bolt with some friends at the wonderful El Capitan Theatre.  It was awesome.

Awesome is a word that gets used a lot, especially by Rhino (the hamster), but it’s not uncalled for.  The movie is that enjoyable.

The Disney Digital 3D was exceptional.

Bolt starts with an action sequence that would give James Bond a run for his money, and it might.  Then it takes you through some of the more predictable staples of the genre: dog meets girl, girl loses dog, dog is determined to find girl, dog meets unlikely pair of sidekicks and hilarity ensues.  The plot does become a bit textbook, but it does so with such humor and sweetness that a familiar storyline winds up not being such a bad thing.

I sat there wondering how Disney makes such things possible, and then the credits rolled, “Executive Producer – John Lasseter.”  Oh, well there was my answer.

That isn’t to take away from what was surely months and months of hard work by the countless many, but there was something in this movie that previous Disney attempts at CGI didn’t have.  There was more heart.

Here’s the breakdown, there were eight of us in our party, two dads, two moms, a 2-year-old, a 5-year-old, a tween and a teen.  Bolt received a solid thumbs up from everyone.  At least six of us said, “it’s AWESOME!”