Question: how do you clip the toe nails of a 265 pound Lioness?
Answer: Very carefully.

As part of the build up to their 10th Anniversary, Disney’s Animal Kingdom has provided The Disney Blog up close access to their animal program and the people who make it work. Dr. Mark Stetter (whom you might remember from the Elephant Vasectomy story) provided our group with a tour of the Animal Care facilities. As Director of Veterinary Services, Dr. Stetter manages all animal health care throughout Disney’s Animal Kingdom and the Walt Disney World Resort. 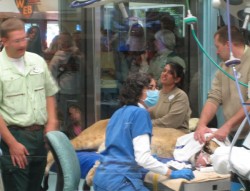 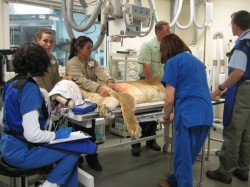 In the room with Chutzpah during her exam are the Veterinary staff and her animal handlers. The animal handlers speak for the animals. Since they’re with the animal on a day to day basis they know if any thing particular needs to be checked out. The combined team works closely together to make sure that nothing unusual is happening and to learn any adjustments that might be required to the animals diets or behaviors as a result of the examination.

You’ll also notice that at least part of the examination takes place right in view of the guests visiting the Rafiki’s Planet Watch area of the park. There is a trained cast member right out with the guests who can answer any questions. Providing this educational experience and highlighting the quality of care each animal receives is just one more important role played by Disney’s Animal Kingdom as part of its 10 years of caring.

I feel very privileged to be allowed to get as close as we did during these procedures. WDW Celebrations Webmaster Adam Roth got to get one step closer. Here he is firing a “tranquilizer” dart into a nearby target. 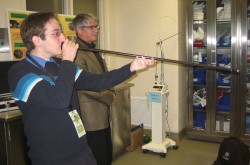 This is similar to the procedure that is sometime used to tranquilize animals to prepare them for a trip to the animal care center. 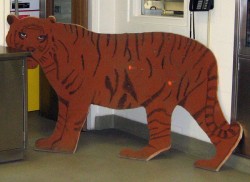 Good Job Adam. That will be one tired cardboard kitty.