For the first story of good work done by the fine folks at Disney’s Animal Kingdom, I thought I’d start with a story you don’t hear much about, but is very exciting to me since it involves re-introduction of a species to Florida. You see, 10 years ago there were no wild Whooping Cranes in Florida.

They had chicks they could transport to the original summer ponds of Wisconsin, But how to induce Whooping Crane chicks raised in Wisconsin to migrate to Florida for the summer when they had no adult Cranes to follow. Use an ultra-light, of course, just like that film “Fly Away Home” did with Geese. 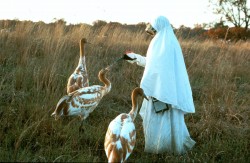 Operation Migration carefully raises the whooping cranes using puppets and feedings from the ultra-light in order to train the chicks to follow the ultra-light. They then perform migrations from Wisconsin to Central Florida (Kissimmee area lakes) with the young Cranes in tow. Each migration is over 1240 miles with over 30 stops along the way. 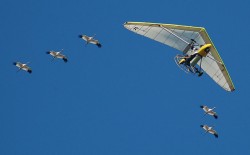 Since 2001 they’ve led dozens of migratory flights from Wisconsin down to Florida. For most of the young birds, you teach them once and they can return year after year. The program has been a great success and there are now 74 Whooping Cranes where there were none.

Disney has played a couple roles in Operation Migration. They provide veterinary check ups for the birds while they are here in Florida. The Disney Wildlife Conservation Fund has also provided over $118,000 to fund the ultra-lights that lead the way.

If you want to learn more Operation Mirgration‘s website is a great place to start and Bring Back The Cranes is another site full of enthusiasm for the project. This is a largely volunteer driven effort, so if you live in the migratory path there is bound to be some way for you to get involved.