Fair warning to the men in the room you may want to avert your eyes in sympathy for our fellow mammalian males during this story.

Southern Africa has an elephant over population problem. Specifically in South Africa and Botswana Elephant overpopulation in wildlife parks and reserves can have devastating effects on the natural landscape and other animal species. Because no proven method of permanent contraception previously existed for elephants, wildlife officials in many countries have considered killing herds of elephants in order to minimize the damage caused by growing elephant populations.

But veterinary experts led by Disney’s Animal Kingdom’s Dr. Mark Stetter have perfected a method of performing laparoscopic vasectomies on elephants while in the wild. This effectively sterilizes male elephants with little trauma or side effects and has given African herd managers an option other than culling. 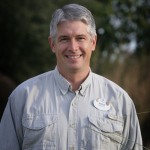 Dr. Mark Stetter with his graying hair and boyish good looks is the Dr. Ross, or Dr. McDreamy if you prefer an ABC reference, of the animal veterinary care world. Dr. Stetter explains that operations in the wild are different from the controlled environment of a zoo. They have to find the elephants, make them go to sleep, then have them wake up and go right back out to the wild. 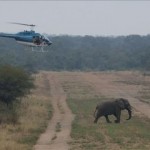 They use a helicopter to find and then dart the animals. They bring them to a clearing where a truck and other equipment can be brought in. Once the elephant is asleep a crane-truck is used to lift them to a standing position. It’s legs are braced and it essentially stands up next to the truck for the surgery. 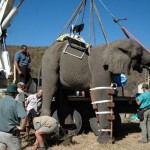 There is another trick with an elephant vasectomy. Unlike most mammals you may be familiar with, elephant testes are located on the interior of the body (near the upper back of the abdomen) right next to the kidney. So an 3-foot long elephant laparoscope was developed to perform this surgery. Disney’s Animal Care program has the only working version of this tool. 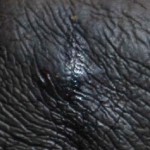 Of course, the nice thing about elephant skin is that it’s already wrinkly, so the incision is hardly noticeable.

Each animal is then collared for tracking purposes to make sure the stitches don’t come out or other complications arise.

Over the course of several years Dr Stetter and his team have perfected the operation. Now they can perform two surgeries a day and should be able to perform 10 additional vasectomies when they return this year.

“We are pleased that the laparoscopic vasectomies have been successfully performed and that wildlife officials are investigating its utility in elephant management for parks in South Africa,” said Dr. Mark Stetter, director of Veterinary Services and Disney’s Animal Programs and leading this effort. “This is a collaborative project that brings together conservation groups, universities and private industry to address a complex and controversial wildlife issue. As an accredited member of the Association of Zoos and Aquariums (AZA) we are committed to finding or creating innovative solutions to issues facing all wildlife.”

This is another example of how Disney’s Animal Kingdom takes wildlife conservation seriously. Not only is the theme park an active and important participant in maintaining a healthy and active elephant breeding program in the North American zoo system, but they take the knowledge they learn and use it to make a difference around the world. Thanks for caring, Disney.

Read more about the project at the Elephant Project Newsletter from 2006 (so it’s a bit out of date) or watch this video prepared by Disney.