Via Archive.org comes this amazing video of a family from Connecticut who won a great contest to Disneyland in 1956. It’s chock full of cheesy humor and corny jokes, and a great look at Disneyland’s earliest days. The 30 minute video also includes stops at other southern California landmarks like Knott’s Berry Farm and Universal Studios. 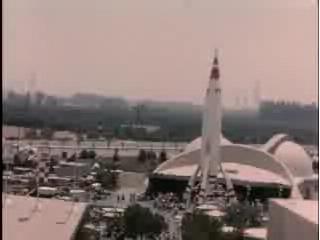 I dig those Mouseketeer T-shirts. This really is some of the best home film footage I’ve ever seen of the early Disneyland days. This visit is just about 1-year after the park officially opened to the public.

In July 1956, the five-member Barstow family of Wethersfield, Connecticut, won a free trip to newly-opened Disneyland in Anaheim, California, in a nationwide contest. This 30-minute amateur documentary film tells the fabulous story of their fun-filled, dream-come-true, family travel adventure, filmed on the scene at Walt Disney’s “Magic Kingdom” by Robbins Barstow.