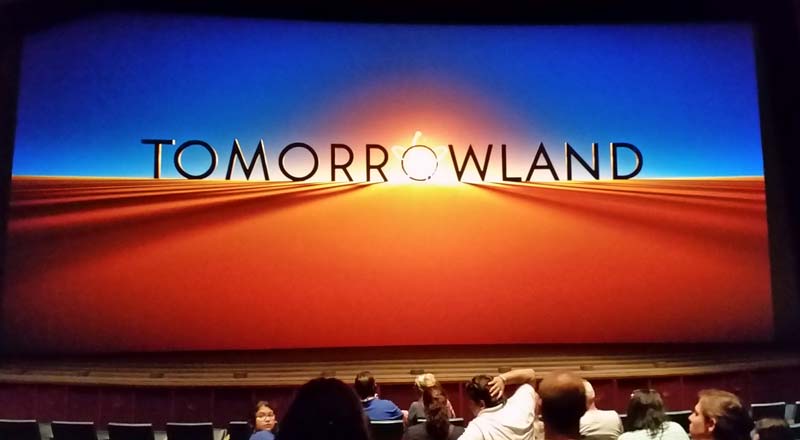 I finally made it to the “Tomorrowland” preview at EPCOT in the Magic Eye Theater. And I have to tell you, if you can get to EPCOT or Disneyland for this preview, you must do so. The preview is essentially the first 10 minutes of… Read More »Disney’s Tomorrowland Movie Exclusive Sneak Preview

Disney dropped a new ad for  “Tomorrowland” during the Super Bowl tonight. You get an extended look at the big city and more of George Clooney and his laboratory.

Additionally, Disney and Google have partnered to create Take Me To Tomorrowland, a multi-sensorial teaser experience on both mobile and desktop. Please visit the site at TakeMeToTomorrowland.com or use Google Voice Search technology (“OK Google, Take me to Tomorrowland”) for your first in-depth glimpse of Tomorrowland. The full site launches this spring, and will transport audiences into an unprecedented 360° Tomorrowland environment.

As we learned last night, Disneyland is throwing a big party for it’s 60th anniversary starting May 22nd. You know what else starts May 22nd? That’s the premier of the much anticipated movie “Tomorrowland.”

To help build up excitement, Disney Pictures plan to run a Super Bowl commercial exposing the film to the big game’s 10’s of millions of audience members.

It’s not much, but the released a teaser to the Big Game trailer this morning.

There’s a much better look at the futuristic city, but that’s about the only thing we haven’t seen in the previously released trailer. Presumably there will be a lot more to see on Super Bowl Sunday.

“Imagine a place where nothing is impossible.”

What a great tagline for the new movie “Tomorrowland.” Loosely inspired by Walt Disney’s constant search for a future world where anything is possible, the new movie from Brad Bird and Damon Lindelof takes audiences on a wild thrill ride of non-stop adventure through new dimensions that have only been dreamed of.

This is the kind of movie that would have really inspired the young me. I can’t wait to bring my son to it.

“Tomorrowland” is a riveting mystery adventure starring Academy Award winner George Clooney. Bound by a shared destiny, former boy-genius Frank (Clooney), jaded by disillusionment, and Casey (Britt Robertson), a bright, optimistic teen bursting with scientific curiosity, embark on a danger-filled mission to unearth the secrets of an enigmatic place somewhere in time and space known only as “Tomorrowland.” What they must do there changes the world—and them—forever.