There are so many good films coming from Disney in 2015. Two from Pixar, Star Wars Episode VII, a live action Cinderella, and Brad Bird’s Tomorrowland. It’s really hard to know which to be more excited over. However, Tomorrowland might have just stepped into the lead. 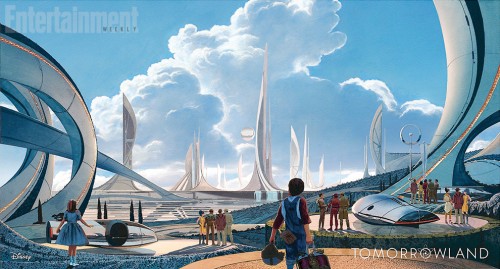 I had no idea that Syd Mead was doing the concept art for Disney’s “Tomorrowland.” Mead is one of my favorite futurist designers and one of the few artists who I think really captures the promise of tomorrow in a way that might be realized today. Which, of course, makes him perfect for this movie.

Entertainment Weekly not only has the above piece of concept art for the film from Syd Mead, it has the first two images from the film. The first features George Clooney and Britt Robertson standing in front of what looks like a bank of computer monitors. Then there’s a beautiful image with Robertson in front of a mirage of a futuristic city. You may recognize Robertson from the TV series “Under the Dome.”

Screenwriter Damon Lindelof (LOST, Prometheus) reveals one of the plot devices from the film:

“There is a piece of technology in this pin, it’s the kind of old-school pin you would wear on your lapel, and when you make physical contact with it, you have the illusion of being physically transported to another world, and that’s how Casey gets her first glimpse of Tomorrowland,” Lindelof says. “She is a Muggle who accidentally wanders across Platform 9 ¾ and sees something she probably shouldn’t have.”

Read the rest of this special preview into the film on EW. “Tomorrowland” opens May 22nd.