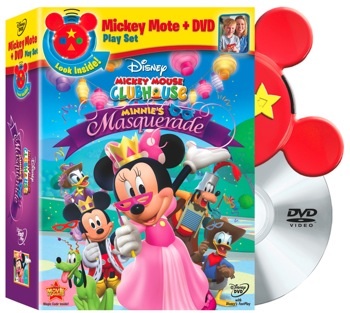 A new DVD and remote package featuring the Mickey Mouse Clubhouse: Minnie’s Masquerade collection of episodes from the popular MIckey Mouse Clubhouse cartoon will debut on February 8th, 2011 just in time for Valentine’s Day. The DVD features preschool level lessons about themes of friendship, teamwork, sharing, problem solving, and dressing-up. The DVD is now available for pre-order on Amazon.

The contestants for the 2011 Miss America pageant were in Orlando to observe the Miss Teen American competition, so what better to do than visit Walt Disney World’s Magic Kingdom. While there, they ran into Mickey Mouse, Minnie Mouse, and a couple of Princesses – Belle and Cinderella. I think Mickey is enjoying the attention just a little too much. He’s a cheeky fella, don’t tell Minnie.

The Miss America Pageant is returning to ABC for its 90th anniversary. The competition will broadcast live from Las Vegas on Saturday, January 15 at 8 P.M. ET

More deets below the jump:

Forever 21 to offer Minnie Mouse Apparel and Accessories for Holidays

A few days back I was in NYC and remarked how odd it would be to have a Disney Store right next to a Forever 21 location in Times Square. Well, the jokes on me. Disney and Forever 21 have a closer relationship than just… Read More »Forever 21 to offer Minnie Mouse Apparel and Accessories for Holidays

They’re all Ears! Wearing Minnie Mouse ears, singer/songwriter Katy Perry (left) and actress/singer Hayden Panettiere (right) strike a pose April 25, 2009 with Minnie Mouse herself at Disney’s Hollywood Studios. The duo was enjoying the theme park prior to their evening performance for the Disney… Read More »Hayden Panettiere and Katy Perry at WDW to perform for Grad Nite

Minnie Mouse cupcakes Originally uploaded by CrazEonCaffeeen Michael made these wonderful Minnie Mouse giant sized cupcakes for his wife’s birthday. Mini Peppermint Patties make the mouse shape and the bows were made out of red and white icing. Also check out the full sized chocolate… Read More »Minnie Mouse cupcakes