There’s an entire new visual language growing out of social media – emoji. The emoji lets the user tell visual stories in new ways. Of course, Disney is all over its story-telling potential with a new app and videos to show off new Disney emoji.… Read More »Disney Emoji Video: Frozen Fever 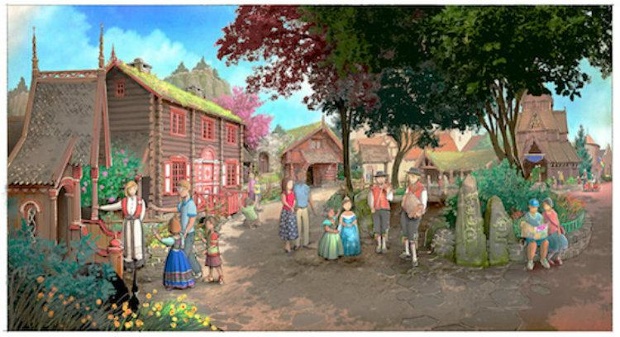 As Disney CEO and Chair Bob Iger has stated, the company plans to capitalize on the success of the biggest animated hit in Disney’s recent history – Frozen. In the parks, that means summer festivals at Disney’s Hollywood Studios and a new attraction and meet… Read More »New concept art from EPCOT’s Frozen attraction in Norway

“Frozen Fever” is an 8-minute long animated short that opens for Disney’s Cinderella in theaters this weekend. I’ll warn you now that I am not the biggest fan of the animated feature Frozen. I didn’t like the story, but I do like the characters. So… Read More »“Frozen Fever” – Animated Short Review

I attended a Press Screening of Disney’s Cinderella this week and while I’m embargoed from giving my review, I can tell you that I also saw the new animated short – Frozen Fever. It’s cute and gives all the movie’s main players at least a… Read More »Cinderella Fever

When Disney’s Cinderella opens on March 13th, it will be accompanied by a new animated short featuring your favorite royal family from Arendelle.

In “Frozen Fever,” it’s Anna’s birthday and Elsa and Kristoff are determined to give her the best celebration ever, but when Elsa catches a cold, her powers may put more than just the party at risk.

There is currently no official word on a full-length animated feature sequel for Frozen, but there is a Broadway Musical currently in pre-production with new songs from husband and wife team Kristen Anderson-Lopez and Robert Lopez who wrote the original songs for “Frozen.”

Good news Frozen fans! (so basically everyone) If you can’t wait for the rumored Frozen 2 sequel then be sure to go see Cinderella! The live action adaptation of the Disney classic. Frozen Fever is an animated short from the award winning team that brought… Read More »Frozen Fever Will Accompany Cinderella