Although it was only served in four fine dining restaurants (Victoria & Albert’s, California Grill, Citricos and Les Chefs de France) in the Walt Disney World Resort, Foie Gras has been quietly removed from the menus. This has generated glee in activists who believe the… Read More »Disney World Restaurants No Longer Serve Fois Gras

Minnie Mouse cupcakes Originally uploaded by CrazEonCaffeeen Michael made these wonderful Minnie Mouse giant sized cupcakes for his wife’s birthday. Mini Peppermint Patties make the mouse shape and the bows were made out of red and white icing. Also check out the full sized chocolate… Read More »Minnie Mouse cupcakes 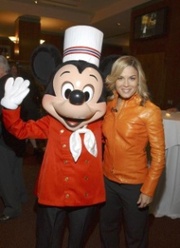