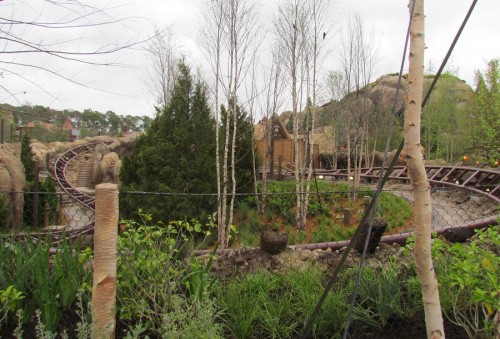 The final phases of work on Seven Dwarfs Mine Train are rapidly approaching. Disney just removed even more walls from around the left side of Snow White’s Mountain revealing more of the track and theme details. It’s amazing how close the cars will pass in front of guests. There should be some great photo opportunities.

Still no official soft opening date, but the grand opening ribbon cutting for press will be on May 2! So expect it to be open to the public shortly before or after that date. If you can’t watch the video above, I have over a dozen photos from my walking tour around the mountain below the jump: Behind the Scenes Video of New Fantasyland Construction – Part 1

With the official grand opening for New Fantasyland this week, it’s time to take a look back at the construction effort it took to get us here. In today’s videos we have a look at Beast’s Castle and the restaurant beneath it, Be Our Guest.… Read More »Behind the Scenes Video of New Fantasyland Construction – Part 1