Making of: The Cars 2 LEGO Trailer

Crikey! A lot of work went into the Cars 2 trailer recreated entirely in LEGO. Here’s a behind the scenes video showing how they did it: Video: Keith Malone, LEGO Creative Director, talks about how the all LEGO Cars 2 trailer was made using stop… Read More »Making of: The Cars 2 LEGO Trailer

The more I hear about Cars 2 the more I’m liking it. It promises to improve upon its predecessor’s box office score and deliver a bunch of new merchandise sales as well. So Disney stock owners should be happy at least. As we get closer… Read More »Cars 2: New clips from Pixar and John Lasseter talks 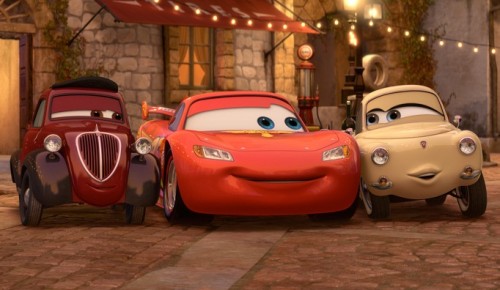 I was recently sent a little snippet from a podcast created by Ken Tangen that reveals some interesting details about an upgrade to the car and motorcycle stunt show that performs at both Paris Disneyland’s Walt Disney Studios and Walt Disney World’s Disney’s Hollywood Studios. Yep, that’s Lights, Motors, Action.

You may have heard about a little movie from Pixar coming out this summer. It’s Cars 2, of course. And where better to promote a movie featuring a little red race car than a stunt show that also features a little red car.

I had heard that the Herbie segment would be replaced by Lightning McQueen, but I didn’t realize how extensive the new segment would be. According to the interview with Rob Pottorf, who composed the music for the segment, there will be an 4-5 minute segment with Tow Mater animated on the screen and a stunt car version of Lightening McQueen (and a bad guy) driving around and but not really doing stunts.

If you want to get a sneak peak, it has already debuted in Paris. You can see a video from that park below the jump:

State Farm has joined with Disney•Pixar’s Cars 2 movie for a fun little commercial that features some of the characters from the film. As part of the partnership the company is hosting a 30 city tour featuring life-size vehicles from Cars 2 and prizes.

State Farm will also be a presenting sponsor at the movie’s world premiere on June 18 at the El Capitan Theatre in Hollywood.

Read the full press release below the jump:

Cars 2 – Featurette – Back into Cars

Pixar is back with a sequel for Cars and hoping they can reproduce the success they’ve had with the Toy Story franchise. While the movie hits theaters June 24th, here’s a new featurette with John Lasseter introducing the story of the movie along with some… Read More »Cars 2 – Featurette – Back into Cars

The second major trailer for Cars 2 has been released. In it we get a few more details surrounding the plot and meet a few new characters that add some spice to the story. If you can’t see it here, check it out at Trailers.Apple.com… Read More »Cars 2 Trailer – New Edition