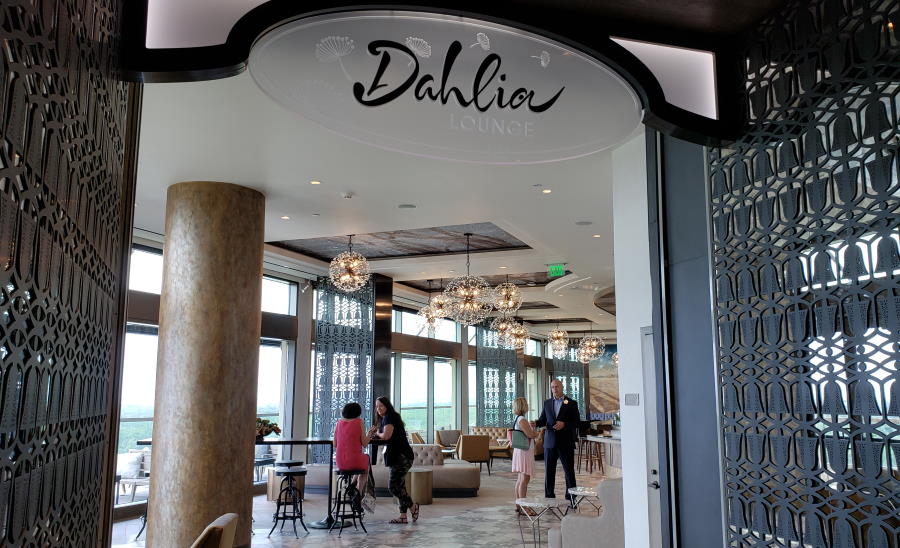 The newest bar and lounge at Walt Disney World might feel a bit surreal, that’s because its themed to one of the characters from Walt Disney and surrealist artist Salvador Dali’s collaboration, the animated short – Destino. We stopped by the Dahlia lounge for a tour and to learn how its signature drink is fashioned.

The Dahlia lounge is on the 16th floor of the new Gran Destino Tower at Disney’s Coronado Springs. In addition the the fine drinks and small plates on its menu it offers a tremendous view looking out toward Disney’s Animal Kingdom, Disney’s Hollywood Studios, and even EPCOT.

We took a tour around the restaurant and at the end get a lesson on how to make the lounge’s signature drink – a Saffron and Orange Gin Tonic from Disney’s food and drink expert Michael Scheifler, proprietor at Disney’s Coronado Springs Resort.

The Dahlia Lounge seats about 80 between indoor and outdoor seating. No reservation is required, although we recommend securing one for the adjacent Toledo restaurant.

The lounge’s visual aesthetics are inspired by scenes from Disney’s Destino animated short. The dandelion art, chandeliers and metal bell accents evoke the spirit of Dahlia herself. You’ll also notice a few more surreal aspects to the decor. Finally, don’t miss the photo wall with pictures of Walt and Salvador sharing time together over their unique passions.

Walt and Salvador were longtime friends and decided to finally collaborate on a piece in 1945. Alas, the Walt Disney Studios was short on cash after World War II so the project never was brought to completion.

That is, until after the success of Fantasia 2000, Walt’s nephew Roy E. Disney revived the project.

The animated short Destino, which features the dancer Dahlia and her love interest the immortal Chronus, did not get finished until 2003 after hand drawn animation experts at Walt Disney Animation Studios picked up their pencils and brushes under the stewardship of Walt Disney’s nephew Roy E. Disney.