With EPCOT preparing to totally remake its Future World area and the old Communicore building that used to hold the EPCOT Character Spot slated for demolition, the popular photo opportunity has found a new home.

For now, the new Character Spot is in the building right across the way from the old one, the former Innoventions West building. You have to enter via the doorway by Living Seas with Nemo and Friends though.

The postcard and travel themed space is a natural fit for EPCOT and the iconic Disney characters.

Inside is some tape on the carpet indicating the queue and three photo spot backgrounds. When we arrived it was Mickey Mouse, Goofy, and Minnie Mouse out to meet and greet guests, but the lineup has been known to vary. 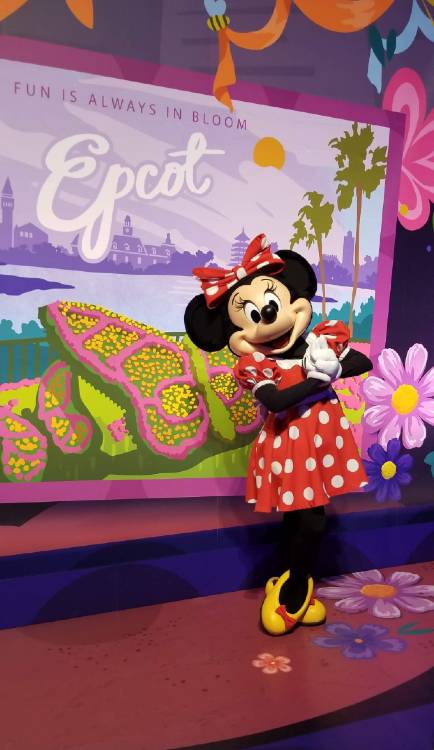 What I like about these character spots is that you don’t feel rushed to move through. The characters are willing to interact with you and try a few different poses if that’s what you want. It’s also nice to have both a Disney Photopass person and a member of Disney’s zoo crew to help with photos.

My only complaint was that they put the backdrops a little too close together. They had room to add another foot or two per backdrop and that would have allowed for more room for groups to wait between the characters.

Eventually, this building too will be demolished and Mickey, Goofy, and Minnie will find a new home in Epcot, but until then take advantage of the new location that has air-conditioning and no fastpass. It makes the wait a lot better..