Central Florida is still potentially in the path of Category 5 Hurricane Dorian. The latest National Hurricane Center advisory this morning has shifted the storm’s path slightly westward. It’s still forecast to pass to the east of Florida’s Atlantic beaches, but tropical force winds will be felt inland.

Dorian is currently stalled out over the Grand Bahamas island. We are keeping the residents of that very low lying island in our thoughts as they face the fury of a category five level storm for hours and hours at a time. It’s currently slowly drifting west at less than 3 MPH.

On September 3rd, in park Dining Reservations will be honored up to 1 hour prior to the announced park closing hours.

Disney After Hours at Disney’s Animal Kingdom on Sept 3 has been canceled. You can call or email Disney for alternatives to reschedule.

Disney’s Fort Wilderness Resort & Campground will be closed beginning September 3 at 3 p.m. and will reopen following the storm when it is safe to do so.

We have contacted guests with current and upcoming reservations at Disney’s Fort Wilderness Resort & Campground, Copper Creek Cabins at Disney’s Wilderness Lodge, Treehouse Villas at Disney’s Saratoga Springs Resort & Spa and the Bungalows at Disney’s Polynesian Village Resort to relocate them to other resorts on property and to help them plan for anticipated weather impacts.

Stay tuned to Disney’s weather page for more updates. Disney may announce further closures if the parks are not safe to operate once the storm has passed through

SeaWorld and Legoland are both closed on the third.

Some closures at Universal Orlando Resort, but both islands of Adventure and Universal Studios Florida are so far expected to remain open. 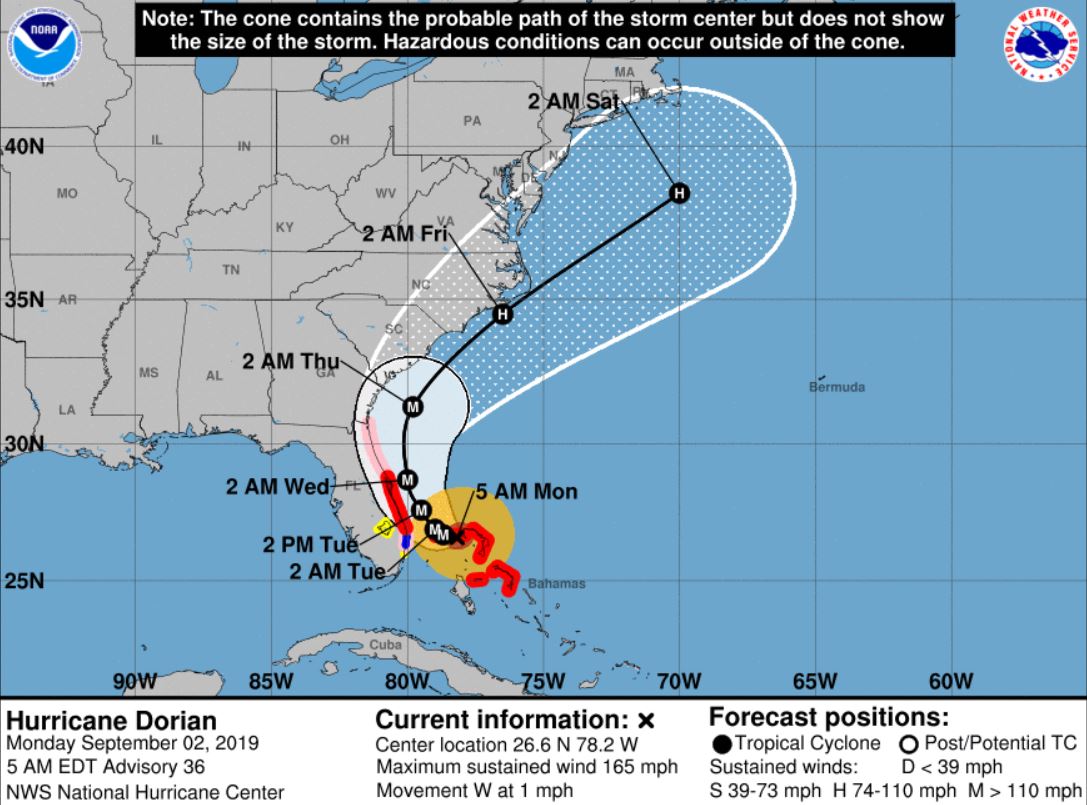 None of the big four Central Florida attractions (Walt Disney World, Universal Orlando Resort, SeaWorld, and Legoland) have announced any closures for today or later this week and continue to operate as normal. The Orlando International Airport (MCO) will be open today, but is keeping an eye on the storm. The Florida Governor has suspended tolls on many of the major highways in Central and South Florida to aid in evacuations if needed.

The current Disney Dream sailing will be extended to September 5th (meaning that four night cruise is now a six night cruise). Castaway Cay continues to be impacted by high winds and elevated water, but avoided the full force of the Hurricane eye wall. We wish the ride out crew luck.

Even if Dorian doesn’t move further west and send Hurricane force winds toward Walt Disney World, there are still plenty of Central Florida attractions that will feel the impact of the storm.

Kennedy Space Center and the Atlantic coast beaches could see major damage. So too could Port Canaveral, home to a Disney Cruise Line port. Some models now show the storm making landfall in Daytona Beach, home to the Daytona 500 at Daytona International Speedway, which is usually used as a staging location for first responders and electricity crews. (Epcot usually offers up part of its parking lot for this service as well.)

These communities all experienced some level of damage from Hurricane Matthew back in 2016. Some coastal restoration projects to recover from damage Matthew caused are still not yet complete.

Previously: What to do if you’ve booked a vacation to Walt Disney World during Hurricane Dorian