Back in February we were excited to announce that Book of Enchantment, an exclusive Disney+ TV series based on Serena Valentino’s top-rated Disney Villains novels, was well in the works under creatives Michael Seitzman, ABC Signature Studios and Christina Davis’ ABC Studios-based Maniac Productions.

While rumors abound that the story themes were too dark, and the cost of production too expensive, these issues have not deterred Disney before. In fact, Walt Disney himself often flew by the seat of his pants investing almost all his money into his creative pursuits while simultaneously introducing dark themes into his otherwise family-friendly stories. What is so different about the Valentino Villains series that makes it fit for the bookshelf but not for the screen?

Too dark? Too expensive? Without having any insider knowledge (I am but a lowly Disney fan), allow me to make a case for the vivacious Villains and a Disney+ series that is true to Valentino’s books.

Honestly, I am not sure what “dark” means to Disney in terms of its alleged reason for pulling the plug on the Disney+ series. Dark could mean scary themes, uncomfortable, confronting or something else. I won’t labor this point (one could write a thesis on this, and some books have been published on similar subjects), but for our purposes, I shall proceed with a few examples of what Disney might mean if they canned Book of Enchantment because it was allegedly too “dark.”

Disney has a slew of films that could fall into various “dark” categories, arguably dating all the way back to its 1937 premiere full-length animated feature film Snow White and the Seven Dwarfs.

Snow White’s stepmother orders not only that her stepdaughter be killed, but that the huntsman return her heart in a chest the stepmother gives him – featuring a heart with a knife through it!

And what about the alarming scene in the haunted forest? Tree branches becoming claw-like hands (similar to the old peddler woman’s hands), wood logs becoming crocodiles, and wide-open encroaching eyes everywhere Snow turns until, with no escape, she breaks down in tears, lost and alone. 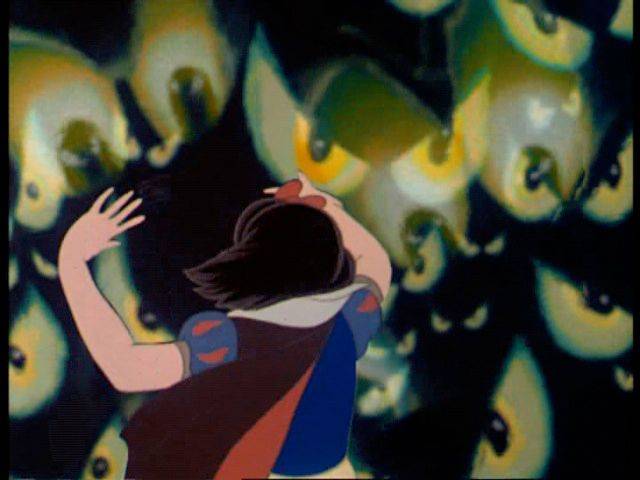 Fantasia gave us Night on Bald Mountain which is undeniably one of the most disturbing Disney depictions ever presented on screen. The viewer spends at least seven minutes with a GIANT winged demon, Chernabog, who summons a near-army of evil spirits. Ghouls, skeletons, harpies, morphing demons, weird masks and skulls are in accompaniment, not to mention that some of the final minutes of the scene are a chaotic blur of all the above. 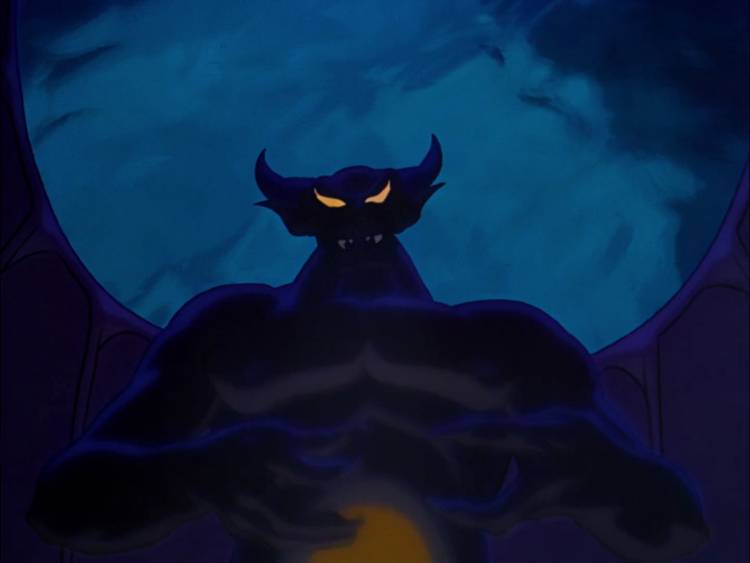 Pleasure-Island Pinocchio fits almost every definition of dark. Kids in that film literally don’t come home. While the film is G-rated, its themes include underage drinking and smoking, death, murder and child trafficking.

Let’s jump forward to 1996– The Hunchback of Notre Dame. Judge Frollo kills Quasimodo’s mother on screen (in a hauntingly beautiful song, might I add). Her skull is crushed on the steps of Notre Dame. Frollo then attempts to throw baby Quasimodo into a well but is stopped by the archdeacon. When asked what he’s doing, Frollo says: “This is an unholy demon. I’m sending it back to Hell where it belongs.” 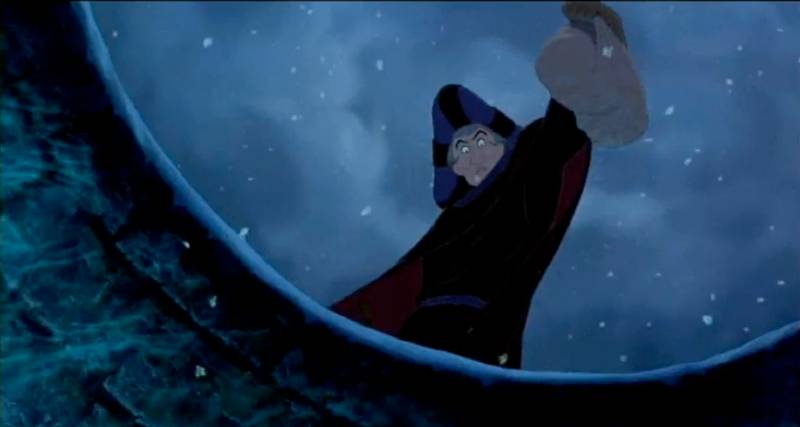 Frozen depicts Elsa’s battle and inner turmoil as she struggles to control her power. When healing young Anna, Pabbie the troll explains to Elsa that she must learn to control her power; fear will be her enemy. The scene shows the “beauty” of Elsa’s power transform into her “enemy” – people/demon-like creatures once surrounding her in admiration now devouring her.

The list could most certainly go on, but hopefully you catch my drift.

Disney’s “dark” films have been worth the investment: economically, artistically and culturally.

“Disney’s Folly” aka Snow White and the Seven Dwarfs became the most profitable film of all time. When adjusted for inflation, the film is said to have grossed more than $1.7 billion. Moreover, Walt was praised for translating his studio’s artistic brilliance into full-length animated-feature-film magic for the very first time in animation history.

Fantasia flopped at the box office when first released, but it achieved “rare cultural stature” in the 1960s. Neal Gabler writes:

In the 1960s… Fantasia’s bright colors and vivid abstractions appealed to a new generation turned on to psychedelia, and the film anticipated Pop artists like Andy Warhol and Roy Lichtenstein. The late horror director Wes Craven called the movie one of his favorites, and Steven Spielberg has said that Fantasia influenced ET. …  cinematographer Ben Davis said that the upcoming Doctor Strange, about the comic-book superhero, would be “Marvel’s Fantasia” because “it’s so sort of out there and different.” Fantasia has achieved that rare cultural stature: It’s a grand failure that became a trailblazer and a part of the national consciousness.

The Hunchback of Notre Dame, or Le Bossu du Notre Dame¸ was a hit in France. It was the biggest-selling movie in the Paris region and across the country for three consecutive weeks with nearly 3 million tickets sold upon opening.

The New Yorker acknowledged that Frozen “took over the world.” It is Disney’s most economically successful film to date and the sixth highest-grossing film of all time.

What does all this have to do with a Valentino Disney Villains Disney+ series?

A Disney+ series true to the Valentino books is worth the economic gamble and creative risk, much like the above examples.

Many of the dark themes in the novels have already been depicted or set up in their original Disney heroine’s stories: the eerie happenings in the forest (recycled frequently in Disney works); the Wicked Queen’s destructive vanity; Ursula’s lust for power and her intent to destroy Triton; magic, spells, enchantments, curses. The list goes on. These themes in the original Disney classics suggest to me that the plot of a Disney+ story inspired by the Valentino books is almost halfway there; the stage set, the die cast. The rest is up to the creatives to cut, paste, mesh and mold the stories and characters to fit the screen and its intended audience.

What is Disney so nervous about? While Valentino’s original characters – the Odd Sisters, and others – do get up to some pretty nasty business, it is nothing Disney creatives can’t handle. After all, what is more troubling than Chernabog and his band of merry… demons?

The Disney Villains have also taken on a successful life of their own in the Valentino novels and beyond. Examples include:

These snippets of success do not address many other media, including the broader merchandising spectrum. They do, however, suggest that Disney’s Villains can and should be developed, revised, rewritten and ultimately propelled forward. This is precisely what the Valentino book series does, and the above examples evidence why staying true to those stories is not a big ask. Now strike while the iron – heart box / enchanted rose / trident / staff / magic hair / etc. – is still hot. Bring Valentino’s Disney Villains to (on-screen) life.

Note: For all those Serena Valentino fans out there, I imagine that Ms. Valentino is not able to comment on the Disney+ news shelving the project. Instead of asking Ms. Valentino for her opinion on the topic, I suggest writing a letter to Disney, writing an article, or tagging Disney on your social media message if you too wish to bring Book of Enchantment (back) to life! You are also welcome to share this article, if you so desire!