Disney gets in on the fan-led button craze

One of the fun ways to enjoy a Disney theme park is when you’re celebrating a birthday or other life event. Guest relations offers free buttons you can wear that let other cast members know of your favorite special adventure. They will almost always greet you with a special message and sometimes there may be a free dessert or other magical moment involved too.

In fact, before there was pin collecting, Disney buttons were a hotly collected item by fans.

Last year there was a flourish of fan made Disney buttons you could wear in the park to express your allegiance to a character or attraction in a sometimes ironic manner. It was a bit of harmless fun.

No one ever accuses Disney merchandising of missing a trend (see also Minnie Mouse earbands), so this year Disney has their own line of buttons that lets you declare the reason you’re visiting the park that day, even if it’s not for a birthday or honeymoon. We spotted these in MouseGear at Epcot:

Which button are you most likely to wear?

Bonus pictures: These Disney drink holders, aka beer cozy or koozie (right ‘mate?), will keep your can of cola (or wine or beer) cool and your hands dry. Bring a bunch home for your next backyard party. 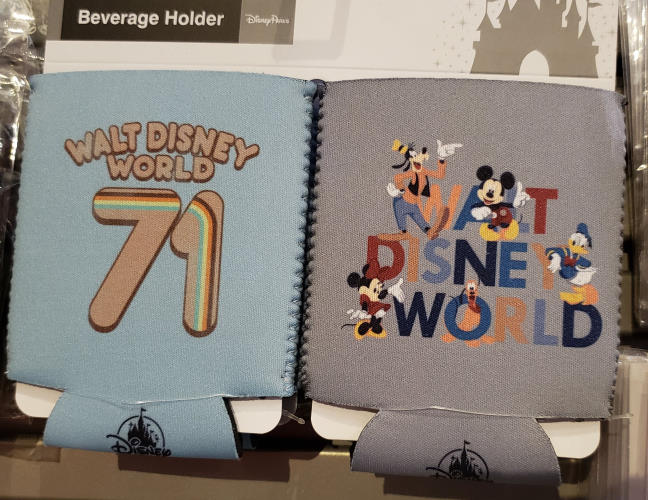 What other fan-led merchandise trend would you like to see added to the parks? I don’t see buttons replacing pin collecting, do you?