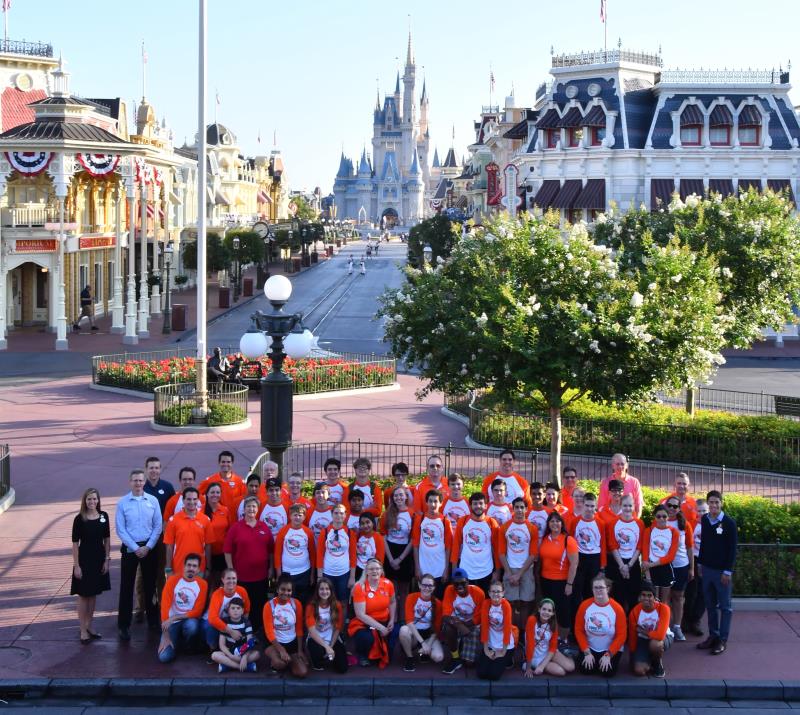 Over the years Walt Disney World has carefully crafted an image as the place where people go to celebrate life’s victories large and small. From winning the Super Bowl to a marriage proposal, it’s where magical memories are made. The latest group to celebrate is a Central Florida Robotics team composed of thirty local high schoolers.

The FIRST Robotics students and their leadership team—which includes several Walt Disney World cast member VoluntEARS—spent an early morning in Tomorrowland prior to Magic Kingdom opening to guests for the day. The group enjoyed exclusive attraction access to Space Mountain, where they had the opportunity to speak with a group of Disney Engineers about the science behind the thrilling attraction.

“Bringing these students out to Tomorrowland, a land dedicated to celebrating innovation and looking ahead, was a way to share the direct impact STEM education has on Walt Disney World, and showed these students how their passion can turn into magic for others,” said Tajiana Ancora Brown, director of external affairs for Walt Disney World.

The team, creatively named “Exploding Bacon,” was recently honored with the Chairman’s Award at the worldwide 2019 FIRST Championship, the most prestigious title awarded through FIRST for consistent demonstration, excellence, and impact within the FIRST and student’s local communities.

Here’s a round up of some of the amazing work Exploding Bacon is doing locally and around the world:

“The FIRST Robotics program builds Florida’s high tech workforce by empowering and enabling our youth to be innovative and creative in working together to build a better, more sustainable future for themselves and those around them,” said DeAnn Davila, Chair of the Florida FIRST Robotics Foundation. “For Walt Disney World to transform into a classroom for some of our students further demonstrates how closely-knit the STEM community is, and how, together, we can all work to encourage these young people to chase and achieve their dreams.”

FIRST is a nonprofit organization advancing youth STEM (Science, Technology, Engineering and Mathematics) education that aims to inspire young people to be science and technology leaders and innovators by engaging them in exciting mentor-based programs that build skill and inspire innovation. Disney has supported FIRST for more than 20 years as part of its commitment to providing today’s youth with inspiration and opportunity through transformative programming.

Congratulations to everyone involved with this fantastic team of inspiring youth!