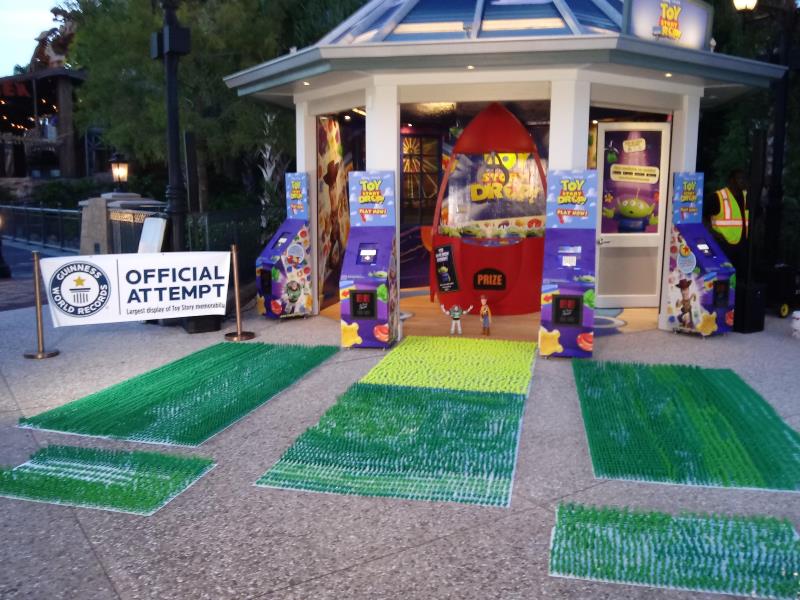 Toy Story Drop!, a new mobile game fully themed in the Toy Story universe, was created by Big Fish Games in collaboration with the Disney and Pixar Games team.

The event kicked off at 7am with an official proclamation that Big Fish Games set a new world record for World’s Largest Collection of Toy Story Memorabilia. They did it by featuring over 10,000 toys on display in front of the Toy Story Drop! kiosk, the majority of them green army men.

After the new record was in the books, the toys were picked up and later donated to Central Florida charity Give Kids the World.

At 7:30am, officials from Disney Springs and Big Fish Games were joined by a surprise appearance by Mickey and Minnie for a ribbon-cutting ceremony and photos.

The Toy Story Drop! pop-up kiosk is located across from Paddlefish at Disney Springs, and will be open through August 2, 2019.

Guests will have the opportunity to play the game for free and learn how to take the world of Toy Story with them anywhere, anytime. Plus they can take selfies with The Claw and even have a chance to get a free limited-edition Toy Story Drop! pop socket, while supplies last.

Toy Story Drop! is available now via iOS, Google Play, and Amazon. Players progress through game play by matching, dropping, and clearing hundreds of exciting puzzles to help favorite characters like Woody and Buzz Lightyear overcome larger-than-life obstacles as they journey across iconic locations such as Andy’s Room and Pizza Planet.

Trailer with some game play examples: