“Tale of the Lion King” debuts at Disney California Adventure 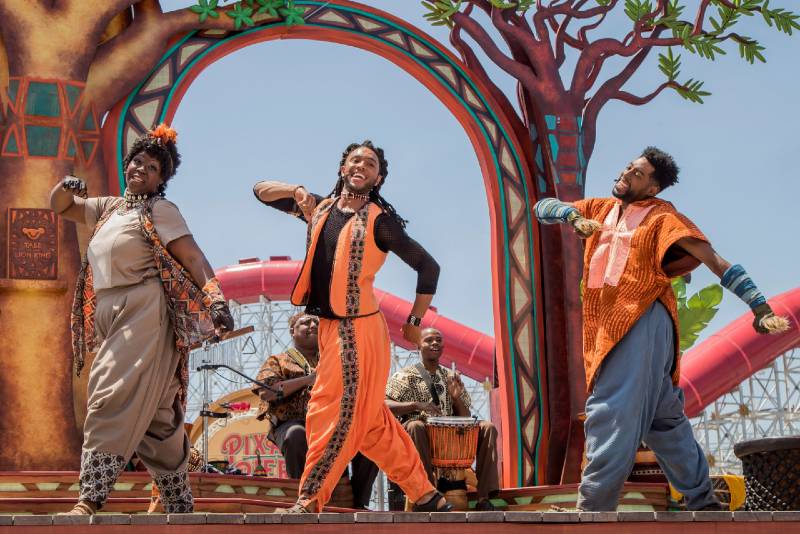 The Lion King is one of Disney’s most popular franchises with a story that resonates and music that reaches down into your soul. To celebrate the 25th anniversary of the iconic film, Disney California Adventure has open an all-new original outdoor musical theater production, “Tale of the Lion King.”

This new stage show celebrates the characters and music of Disney’s “The Lion King” in an imaginative and unique way. The lead narrator, Mwongozo –Swahili for “guide”— leads a troupe of 18 performers called the Storytellers of the Pride Lands in this adaptation, which is presented in a contemporary story-theater style that retells the tale through language, song and dance.

“The approach that we’ve taken with ‘Tale of the Lion King’ is that this is a story that was passed on from generation to generation, and now it’s come here to Disney California Adventure park,” said Susana Tubert, Creative Director, Disney Parks Live Entertainment. “The Storytellers of the Pride Lands have come to share this ancestral story of how a cub became a king.”

When you watch the show, you won’t be able to stop from dancing and singing along to the new musical arrangements of their favorite songs, including “Circle of Life,” “Can You Feel the Love Tonight” and “Hakuna Matata,” among others. The live drumming and singing, along with the set and costumes all celebrate the cultural roots of this beloved Disney story.

Disney has given “Tale of the Lion King” a prominent location at Palisades Stage in Disney California Adventure. Check your times guide or app for show times. This is a limited-time offering, so don’t sleep on your next visit to Anaheim.