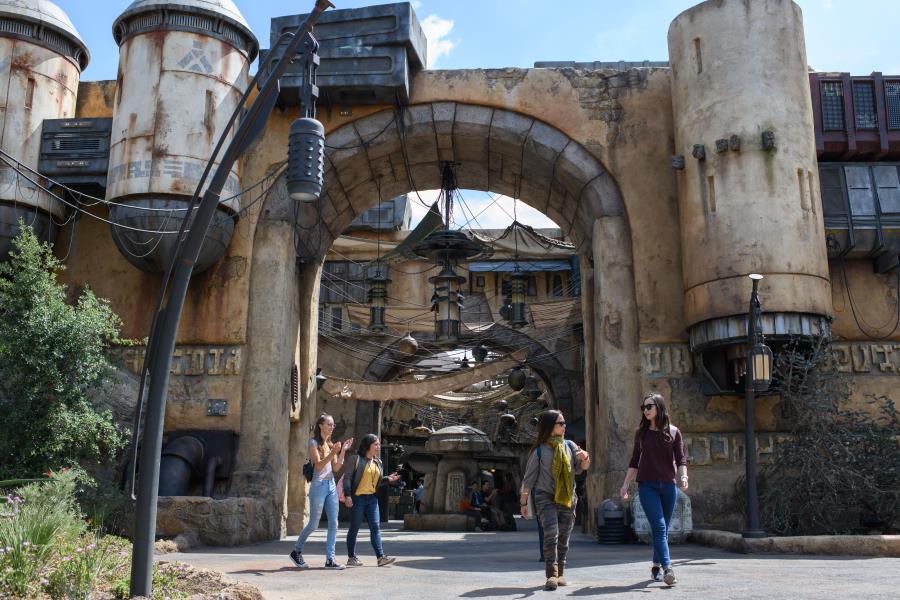 A walk-through the newly opened Star Wars: Galaxy’s Edge at Disneyland is like an archaeological dig through four decades of Star Wars films, television series, novels, comic books, video games, and more. Walt Disney’s Imagineers partnered with Lucasfilm to make sure the experience was not just immersive, but also authentic to Star Wars storytelling.

That said, the outpost of Black Spire on the planet Batuu is an entirely new place in the Star Wars galaxy, so there’s a lot new to explore as well.

We had the chance to fulfill our dream of walking through that galaxy far, far away during the media preview yesterday. We were amazed with all the little details and easter eggs that will keep Star Wars fans coming back for more.

This was our first look inside the new land:

Hidden Gems to Look for in the Land

The Millennium Falcon is the star of the show and you’ll remember your first in person viewing for the rest of your life. Here was ours:

It’s All About the Story

Want to visit Star Wars: Galaxy’s Edge at either Disneyland or Walt Disney World? Let The Disney Blog’s own authorized travel planning agent help you plan the perfect trip to Batuu. Your use of this free service to receive a no-obligation quote helps support The Disney Blog. Thank you.

If you would like more information on booking a Disneyland or Walt Disney World vacation, please send an email to Pixie Vacations authorized Disney travel agent Stacey Frost ([email protected]), call (407) 454-1477 or fill out this form for complimentary travel planning. Your use of this free service to book your travel will help support The Disney Blog. Thank you.