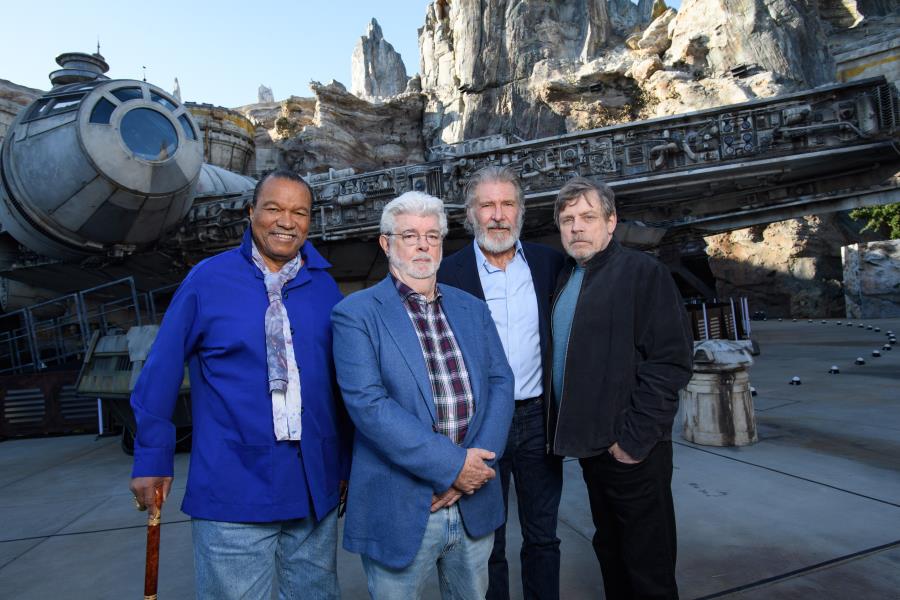 In a ceremony set to the soaring John Williams score composed especially for the land, global media and invited guests were the very first to see the fastest hunk of junk in the galaxy roar to life. It was fantastic to have the four Star Wars legends on hand for the grand opening ceremony, but also reminded us of those we’ve lost on the way.

“Peter this one’s for you!” exclaimed Ford as he signaled the big dedication fireworks moment. The dedication was to his long time friend and the originator of the role of Wookiee Chewbacca from the Star Wars films – Peter Mayhew. Mayhew recently passed away leaving fans and co-workers devastated by the loss. The dedication to Mayhew was a classy moment from Ford.

“Star Wars: Galaxy’s Edge is absolutely amazing and we are thrilled to finally share it with the world,” said Bob Iger, chairman and CEO of The Walt Disney Company. “Now, for the first time, fans will be able to immerse themselves in the iconic stories that have captured audiences’ imaginations for decades and live their own Star Wars adventures in the most creative, innovative and ambitious land we’ve ever built.”

Disney’s collaboration with Lucasfilm goes back to the creation of Star Tours in 1987. During the dedication ceremony George Lucas called this new Star Wars-themed land a “Star Tours on steroids.”

At Disneyland, Star Wars: Galaxy’s Edge will open to guests with reservations on May 31, beginning June 24th you won’t need a reservation, but it will be subject to capacity. The nearly identical Disney’s Hollywood Studios version won’t open until August 29. It’s also important to note that just one of two big rides, Millennium Falcon: Smugglers Run, is open at the moment. Star Wars: Rise of the Resistance, an ambitious, immersive, and by all accounts bonkers attraction, which will place guests in the middle of a climactic battle between the First Order and the Resistance and will blur the lines between fantasy and reality, won’t open until later in the year.