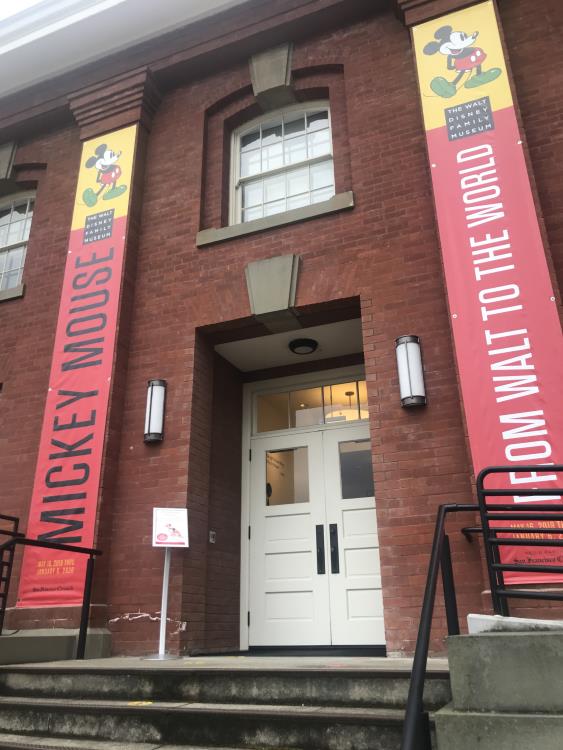 I had the honor to preview the magical, original exhibition Mickey Mouse: from Walt to the World at the Walt Disney Family Museum in San Francisco. We also had a tour by legendary animator Andreas Deja, who is the guest curator of the exhibit.

The exhibit features more than 400 objects, including rare and never-before-seen original sketches, character model sheets, and concept artwork, together with nostalgic merchandise, vintage photographs, and a variety of Mickey’s earliest and most recent animated short films.

As you move through the gallery you start with the earliest pencil original drawings and storyboards of Mickey Mouse in black and white by Ub Iwerks and Walt Disney. Priceless.

The next gallery is Mickey in color, featuring drawings and sketches from Mickey’s Fire Brigade (1935), Moose Hunters (1937) Clock Cleaners (1937) and from the Academy Award nominated, The Brave Little Tailor (1938)  when Mickey was at the peak of his superstardom.

Deja said that this film inspired him and is one of his favorite Mickey shorts. He noted that this was the last time you saw Mickey drawn with his eyes completely black.  I found fascinating a letter and a photo from Walt Disney to Charlie Chaplin, who Walt would look to for advice on how to sell his films.

We move on to the next gallery and the age of Television and Mickey’s influence on the new media of the time.  The Disneyland TV series, which debuted in 1954, became the highest rated television show of its time. Of course The Mickey Mouse Club was an instant hit and made television history, breaking records with young audiences. Television made Mickey an American hero to kids of the time and for future generations.

The next room was very important to Deja and to him one of the most important in the gallery.  The Drawing of Mickey. Deja spoke about how each animator who drew Mickey before him gave him advice on how to make Mickey come to life.  Frank Thomas told him, “Make sure your audience knows what Mickey is thinking.” Marc Davis said, “Work with the anatomy to make him real.” and Ward Kimball said, “Do your own thing!”

In this gallery guests are able to get artistic and practice drawing their own Mickey Mouse characters.  Around the top of this room there are drawings of Mickey running and taking up space. Deja really likes this feature and it really is fun to see.

Moving on, the Mickey International room featured art and merchandise from all around the world.  A few of my favorites were a moving display from a London department store, and a figure from a carousel in France.  Of course Disney would send guidelines on how to make Mickey, but those guidelines were not always followed and made for some interesting interpretations.

The next room was all about the men who created Mickey, his voice and drawings.  It was very interesting to see the different styles of the animators and the subtle differences you can hear with the voice actors.  Of course it all started with Steamboat Willie which was the beginning of Walt Disney’s voice acting career. My favorite examples were Ward Kimball who had some really different drawings of Mickey and of course Andreas Deja.

The gallery upstairs showed how Mickey evolved in the parks, especially Disneyland, from a slightly frightening looking Mickey to what he is today.

The rest of the gallery is Mickey featured in Fine Art. There are some incredible and amazing paintings of our favorite mouse in pop and contemporary art, by some legendary artists such as Andy Warhol, Roy Lichtenstien and Keith Haring.

Featured in the gallery is a painting by artist Damien Hirst that is on loan to the museum from Walt Disney CEO, Bob Iger. Hirst created his own interpretation of Mickey.  Several spots on canvas in red, yellow, off-white and black paint. He noted that the character is still instantly recognizable because Mickey Mouse is such a powerful icon.

We were very lucky to meet modern artists Tennessee Loveless and Simon Norris who created paintings specifically for the exhibition and spoke about how Mickey Mouse is such a huge influence on their art.  Their intricate pieces could leave you looking at them for days, there is so much to see in each piece.

Loveless shares he is colorblind and he understands hues in a conceptual way, often making choices based on the fundamentals of color theory, word association, and color psychology, instead of considering the color itself.  He calls this painting Everything Bagel with Digital Shmear (2019)

Norris is known for his extensive public art contributions including many murals across San Francisco.  He created the mural Generations (2018), just for the museum. Norris tells us he included many nods to San Francisco, Pixar and the Museum, and of course it features Mickey Mouse, all 12 of them.  There are also hidden Mickey’s throughout the piece. I loved the reference to Walt’s life when he served in the Red Cross during World War I.

Finally, they end the exhibit with the most current evolution of Mickey through his new shorts that maintain the same adventurous spirit and sense of humor. These cartoons introducing Mickey to a whole new generation of children.

There are many more important works of art included in the gallery.  Deja was asked what it was about Mickey that made him an international icon and so beloved.  He replied, “He brings happiness, there is a buzz about him, he lifts you up, which is especially important in these times.”  He hopes that the gallery mirrors that sentiment and I can tell you it truly does.

Be sure to see this incredible exhibit of Mickey Mouse: From Walt to the World. The exhibit is open to museum guests now through Jan 6, 2020. Reservations are suggested as the museum has a limited capacity.

1 thought on “‘Mickey Mouse: From Walt to the World’ exhibit now at Walt Disney Family Museum”