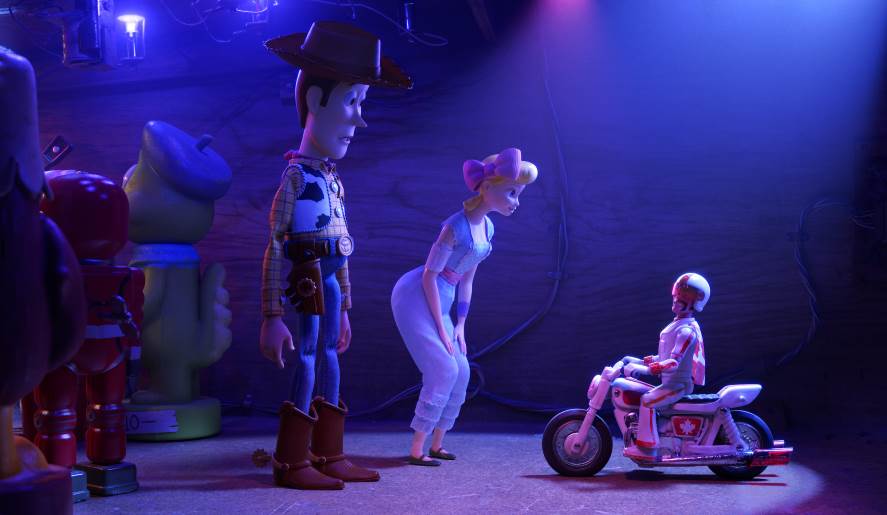 A new TV spot for Pixar’s Toy Story 4 introduces us to Canada’s greatest stunt toy from the 1970s. Woody and Bo Peep encounter Duke Caboom and his powerful Caboom stunt-cycle in their visit to an antique store. We like how the spot is mostly a commercial for the toy. Gives off some great retro-70s vibes:

Here’s what Pixar tells us about Duke Caboom:

Duke Caboom is a 1970s toy based on Canada’s greatest stuntman. Riding his powerful Caboom stunt-cycle, Duke is always prepared to show off his stunt poses with confidence and swagger. However, Woody learns quickly that Duke has an Achilles heel: He has never been able to do the awesome stunts advertised in his own toy commercial. For years, Duke has been sitting in an antique store, constantly reliving the failures of his tragic past.

Duke Caboom is voiced by another great Canadian, Keanu Reeves. “The first time Josh [Cooley] and I talked with Keanu about the role, Keanu became Duke Caboom,” says producer Jonas Rivera. “Keanu was asking great questions that dug deep to find the soul of the character. At one point he stood up on the table in the middle of Pixar’s atrium and struck poses while proclaiming victory. It was so funny. It’s all in the movie and it’s all Keanu.”

I totally had the Evel Knievel stunt-cycle toy that Duke Caboom is so lovingly paying homage to. In my mind he was a able to recreate all those stunts I saw on TV, even if in my basement he was just jumping over Hot Wheels cars.

Woody has always been confident about his place in the world and that his priority is taking care of his kid, whether that’s Andy or Bonnie. But when Bonnie adds a reluctant new toy called “Forky” to her room, a road trip adventure alongside old and new friends will show Woody how big the world can be for a toy. Directed by Josh Cooley (“Riley’s First Date?”) and produced by Jonas Rivera (“Inside Out,” “Up”) and Mark Nielsen (associate producer “Inside Out”)