Get ready for a rootin’ tootin’ good time at a new Toy Story themed table service restaurant just announced for Toy Story Land in Disney’s Hollywood Studios. In Roundup Rodeo BBQ guests who have already been magically transformed to the size of a toy when entering Toy Story Land, will discover a new rodeo play area set up by Andy. Of course, this being Andy, it isn’t your typical rodeo.

Staying with the theme of using materials he has around his home, Andy roped together a new rodeo arena using cardboard boxes, tape, and some of his favorite games and playsets. The western-themed sets and toys also features your favorite toys from the beloved Pixar Toy Story franchise. Expect it to be bright, colorful, and fun as Andy’s imagination always is. 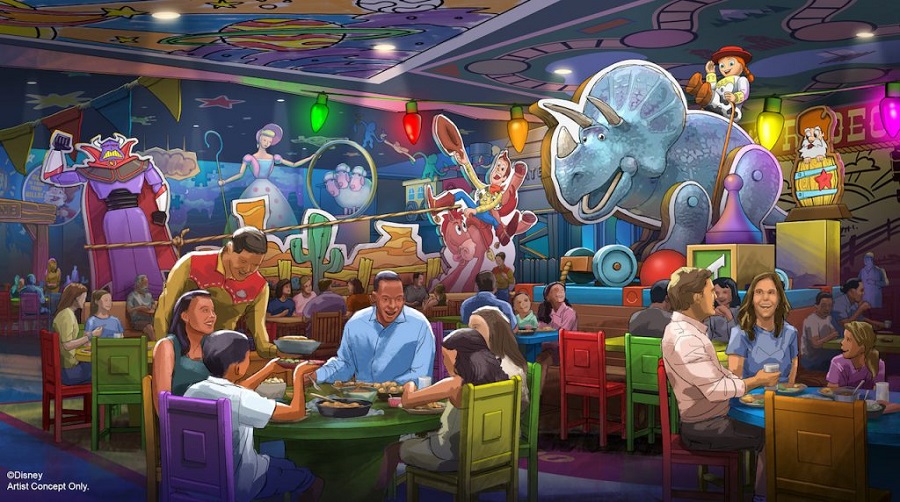 No opening date has been announced, nor has Disney said where it will be located inside Toy Story Land, but there are a few spaces tucked around the land that are available to be built in.

We like the idea of a BBQ restaurant. First of all, it’s in Andy’s backyard and who doesn’t love a backyard barbeque. Second, Disney’s Hollywood Studios doesn’t have a full BBQ menu anywhere right now (ABC Commissary offers some BBQ options). This will add some welcome variety to the Disney Dining mix at the park.

An indoor air-conditioned restaurant is the number one desired addition to Toy Story Land according to our informal survey today while standing in line at Woody’s Lunch Box, the queue and seating of which is outside in the sun. Having inside dining will be much welcome addition.

Are you looking to the Roundup Rodeo BBQ opening in Toy Story Land at Disney’s Hollywood Studios?