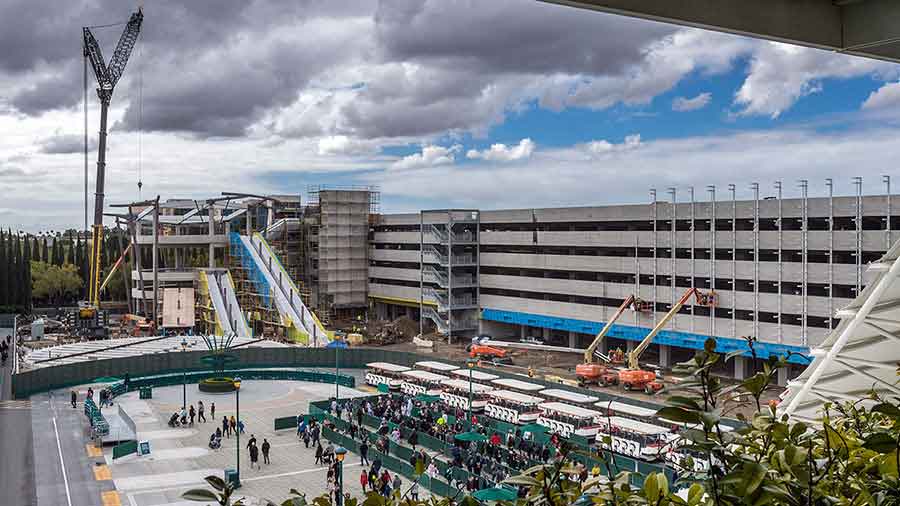 Disneyland’s second major parking structure is expected to add more than 5,000 much-needed parking spaces to the resort. The Pixar Pals structure will sit adjacent to the Mickey & Friend structure and its nearly finished. The new garage for guests of the Disneyland Resort is part of a multi-year effort known as ‘Project Stardust’ that includes a number of enhancements to the resort designed to improve guest flow while adding to the park’s ability to handle larger crowds.

The original plan was to build the second garage to the east of the park. The idea of a pedestrian bridge over Harbor Blvd was not approved by the City of Anaheim after protests by businesses in the area. Efforts by Disney then moved to a second garage adjacent to the existing Mickey and Friends parking structure.

This caused a delay which now means the new structure will likely not open in time for the initial rush of guests expected for Star Wars: Galaxy’s Edge in May. Right now the target date is July sometime which is months after the new land opens. We’re curious if Disneyland will figure out some additional parking options for the huge crowds expected during May and June.

The characters for each level of the Pixar Pals structure have now been revealed. Helping you know where to return to after a long day at the park will be characters from: “Incredibles,” “Coco,” “Cars,” “Monsters, Inc,” “Finding Nemo,” and “Inside Out.”

The Disneyland Resort is also rushing to expand the Toy Story lot with an additional 2,000 parking spaces and additional entrances to ease guest flow. In addition, during peak times, guests will now go through screening at the Toy Story parking lot before boarding shuttles and will be deposited inside the security envelope at the resort esplanade.

If you’ve driven to visit Disneyland Resort recently how would you describe the current parking situation?

previous5 Genies stop the show at Aladdin to celebrate 5 years of Broadway Magic
nextMarvel’s Agents of S.H.I.E.L.D. returns to ABC for sixth season