As a Disney fan, how closely align do you feel to the company’s values? A study from MBLM measures ‘Brand Intimacy,’ which is the study of brands based on emotions, and Disney just overtook Apple for the first time to top the list. Brand Intimacy is defined as the emotional science that measures the bonds we form with the brands we use and love.

Media and entertainment brands dominate the top 10 of the list. The rest include: Amazon, Chevrolet, Netflix, Harley-Davidson, PlayStation, YouTube, Ford, and Chick-fil-A. 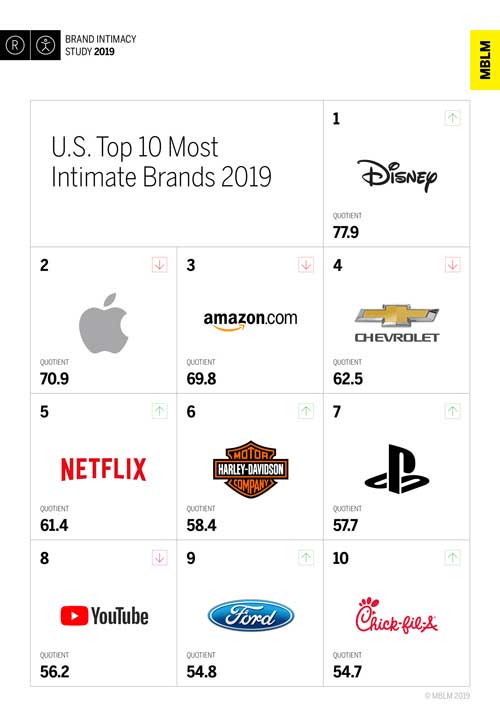 According to the study, Disney dominates via its associations with nostalgia and the strong bonds it builds with both men and women and across a variety of age groups. Meanwhile, Apple has lost some luster. Through its well-publicized missteps and consumer gadget fatigue, the brand, while strong, has declined in the U.S.

As you might expect Disney’s associations with nostalgia helps it build strong bonds with both men and women across a variety of age groups. Disney’s work to stay relevant with younger users paid off as the study found millennials and users aged 35–54 were more intimate with media and entertainment brands.

“We know that customers who form strong emotional bonds with brands are willing to pay more and are less willing to live without them. Insights from our annual ranking of brands are providing lessons and new strategies for business leaders and marketers,” Mario Natarelli, managing partner, MBLM, said in a press release, adding, “Our demand for escapism and our collective need for a distraction from reality is factoring heavily in the brands that rose in 2019.”

Additional significant findings in the U.S. include:

How would you rate your affinity for the Disney company? Are there any other firms that command your respect and allegiance more?